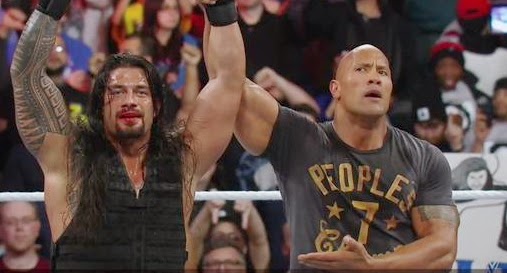 Tonight was the annual Royal Rumble pay-per-view which starts the Road to Wrestlemania 31 which will take place at Levi’s Stadium in Santa Clara, California. I have always been a huge Royal Rumble fan and this one was no different. Before I begin with my thoughts here are the results from the night:

Some of things I didn’t like is Divas tag match. It was an absolute sloppy mess. This is why I wish they would bring up girls who can wrestle like Charlotte, Sasha Bank and Bayley. Even though the triple threat WWE Championship match was spectacular I feel that they dropped the ball by not having Rollins cash-in. I feel like the future is now for these guys. Brock Lesnar should not be in the main event of Wrestlemania if he’s leaving a day later to go back to the UFC. The other thing that is complete garbage is that Daniel Bryan didn’t even last 10 minutes in the Royal Rumble. Is WWE really that stupid and going to make the same mistake they made last year? I cannot believe the stupidity on the part of the creative teams. It’s no wonder why they are hiring for writers again. They eliminated to two crowd favorites really quickly in Bryan and Ziggler. The other surprise was when The Rock came out to help Roman Reigns fend off Big Show and Kane which allowed Roman to eventually eliminate Rusev and win the Royal Rumble.

I did like a few things about this year’s Royal Rumble. The crowd from the get go was hot and they were cheering anyone whoever wrestled in ECW, CZW or ROH. I like that The Ascension went over on the New Age Outlaws. In the Royal Rumble match itself they had some great surprise entrances with the likes of the Boogeyman, Bubba Ray Dudley, and Diamond Dallas Page.

The big question is when will the WWE start listening to their fans? They want to see guys like Daniel Bryan, Dean Ambrose, Dolph Ziggler, Cesaro and Seth Rollins in the spotlight. Roman Reigns has a great look, and I am sure he has passion for the business but the fans are not interested in him. The way they booked these guys in the Rumble match was absolutely horrible. We are now on the Road to Wrestlemania 31 and that means my weekly column during Wrestlemania season is back. I will be covering each week leading up to Wrestlemania 31. The WWE better make some changes before WWE Fast Lane on February 22nd and better give Daniel Bryan, Dolph Ziggler and Dean Ambrose something big for Wrestlemania season. There are so many young guys who deserve the spotlight and I hope they get their chance. Until now we have to sit back and see how the Road to Wrestlemania turns out.