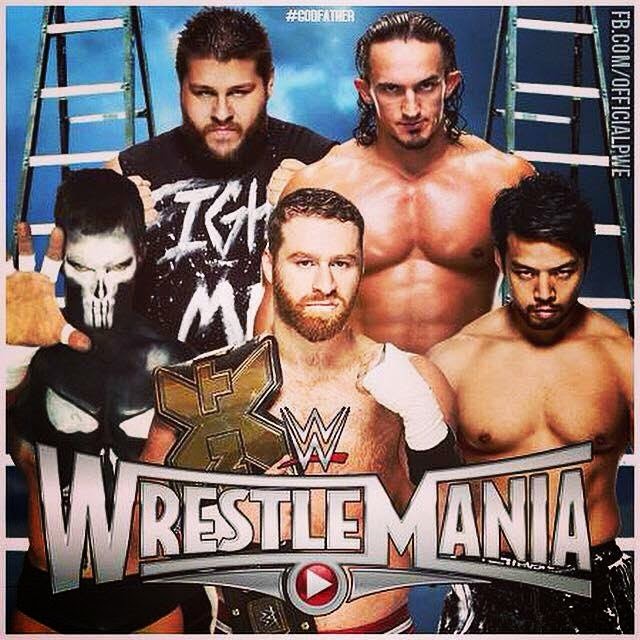 After watching NXT Takeover Rival and hearing the rumors of a multi-man NXT match for Wrestlemania I truly believe that NXT having a match at Wrestlemania needs to be set in stone. The proposed match I have heard talked about is a 5 man Ladder Match involved for Hideo Itami, Finn Balor, Adrian Neville, Sami Zayn and new NXT Champion Kevin Owens. Ever since the WWE Network started the NXT specials have blown what the main roster does out of the water. I have not heard a bad thing about NXT since it has been heavily featured on the network. When I see legends, hall of famers, celebrities and sports media praising NXT more than they do Raw or Smackdown then you know you’re doing something right.
Having these five men involved with Wrestlemania would make a lot of sense from trying to gain viewer and a larger audience. You would have the loyal Ring of Honor fan base and the loyal fan base of New Japan tuning into to see how their big stars do on the biggest show of the year. Triple H, William Regal, and the rest of the NXT crew has done a great job scouting and developing talent from around the world. However when thinking about the possibilities of NXT being on Wrestlemania and other pay-per-views it should not just be limited to these five guys. The women of NXT have really been tearing the house down with their matches. I’ve stated for the last year that the only Divas who can hold a candle to the NXT Divas are Naomi, Natalya and Paige. The rest of the Divas on the rosters are glorified models who wouldn’t know what a great wrestling match if it bit them in the rear end.
There are so many great things about NXT. The main thing I enjoy about NXT is that Vince McMahon and his Hollywood writers have nothing to do with it. The main people running NXT are Triple H, Road Dogg, Billy Gunn, William Regal and Dusty Rhodes. Wrestlers writing wrestling shows? What a novel and logical idea. I like that NXT is like ROH, New Japan and other indie promotions out there. A lot of the guys who came with previous wrestling experience were allowed to keep some of their characters intact. That in itself has help draw a great fan base for a great wrestling product.
Whether NXT is on Wrestlemania 31 and future Wrestlemanias remains to be seen but their place on the show would be best for business. I truly believe that NXT is the best wrestling show out there right now. They have the production of WWE combined with the styles of ROH, New Japan and Lucha Underground. It’s an all around great one hour wrestling show each week. When it becomes two hours, it gets dialed up even more. NXT is the future and what better way to test the future than putting them on the biggest show of the year. NXT is taking over and it’s time for NXT to showcase it’s immortality, and it’s start to a long lasting legacy. Wrestlemania is the place to shine and no one is shining brighter than the stars of NXT right now.
Please Share This