This week on the Road to Wrestlemania we had some shocking revelations about the main event of Wrestlemania 31. Daniel Bryan will take on Roman Reigns at WWE Fast Lane after Bryan defeated Seth Rollins on Raw. The winner of Reigns and Bryan will face Brock Lesnar at Wrestlemania. The other big news for Fast Lane is the Rusev will now have to defend the United States Title against John Cena. Also on Raw Big Show defeated Roman Reigns, The Ascension defeated Goldust and Stardust, Ryback defeated Luke Harper, Cesaro defeated Jimmy Uso, Bray Wyatt defeated Dolph Ziggler, Paige defeated Alicia Fox, and Sin Cara defeated The Miz.
Some of the the things that have caught my attention with this Raw are that Cesaro and Tyson Kidd are in line for a tag title shot at WWE Fast Lane. I also two teams spitting up in the near future. I think Stardust is going to end up being Cody Rhodes again and retire his brother Goldust at Wrestlemania. I think Mizdow will be going to back to being Damien Sandow and becoming a huge face when he goes over on The Miz. It would be stupid not push Sandow with the reaction he’s been getting from the crowd. It also sounds like Dean Ambrose wants a shot at Bad News Barrett and the Intercontinental Title. When and where that will take place remains to be seen.
On Smackdown it was a repeat all over again from last year. Daniel Bryan getting beat down at the end of the show by members of The Authority. He was in a three on one handicap match with Seth Rollins, Joey Mercury and Jamie Noble, which was set up after Rollins interrupted Bryan and Reigns on Miz TV. Also on Smackdown, Dolph Ziggler/Ryback defeated Goldust and Stardust, Dean Ambrose defeated Curtis Axel, Fandango defeated Adam Rose, Roman Reigns defeated The Miz, Rusev defeated Erick Rowan, and Paige defeated Alicia Fox.
On Raw and Smackdown Bray Wyatt had some eerie promos that were directed at one man. I believe that man in The Undertaker. There a lot of mixed feelings on if The Undertaker should come back or not. I personally say no because his streak has ended and the man can no longer carry a match. The Undertaker did not look good last year and in my opinion his career has ended. I would not even give him a second thought at this point. Now stars that I would give a lot of thought too are these two: 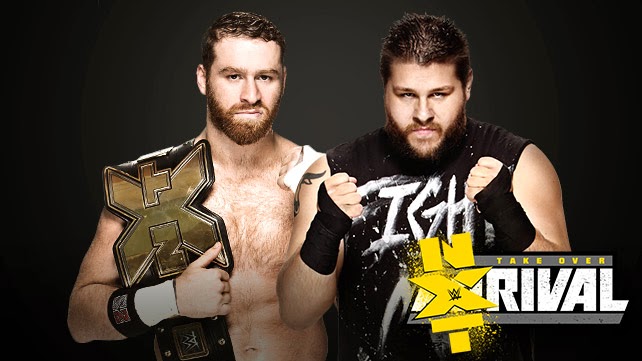 Next week Sami Zayn will defend his NXT Title on NXT Rival against his longtime friend and in ring nemesis Kevin Owens. I will be talking a lot about NXT next week because it will be running live in conjunction with Raw and Smackdown. Other matches at NXT Rival include Baron Corbin vs Bull Dempsey, Murphy/Blake vs. The Lucha Dragons, Adrian Neville vs. Finn Balor, and Charlotte  vs. Bayley vs. Sasha Banks vs. Becky Lynch. This show is very important because if NXT has another good showing then we could very well see NXT featured on Wrestlemania. I personally believe NXT needs to be featured on Wrestlemania. They needed to be tested to see if they can handle the big pressure and the big crowds.