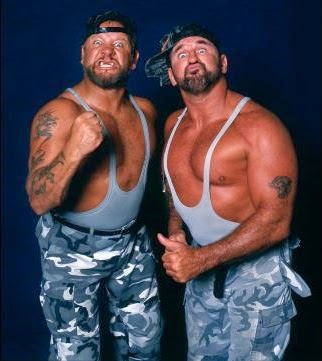 Back in the 80’s and 90’s there were two crazy lads from New Zeeland who went around licking and stomping their way through the competition. They were savages, the were fun and they were one of the most underrated tag teams in the history of the pro wrestling business. Butch Miller and Luke Williams were best known as The Bushwhackers and had a tag team career that spanned over forty years. Before they were the Bushwhackers, they were known as the Sheepherders and they were one of the most savage teams around the wrestling world. They feuded with Ted DiBiase/Steve Williams, Badd Company (Pat Tanaka and Paul Diamond), The Fabulous Ones, and Mike Graham/Steve Keirn

In 1989, they signed with the WWE and spent the next seven years entertaining everyone who watched. They had some great skits with Mean Gene Okerlund and Lord Alfred Hayes. They feuded with The Fabulous Rougeau Brothers, Rhythm and Blues (The Honky Tonk Man and Greg Valentine), The Natural Disasters, The Beverly Brothers, The Headshrinkers, The Blu Brothers, and The Bodydonnas. The last appearance of the Bushwhackers in the WWE was at 2001 during the Gimmick Battle Royal at Wrestlemania 17.
Even though they never won tag gold in the WWE they had 22 tag title reigns in the various promotions they worked in. Some question whether or not this is deserved but if you ask me I would say very well deserved. The had a different style, unique on screen presence and a lot of longevity. No one before or after has been like the Bushwhackers. I am excited to see Luke and Butch lick, stomp and whack their way into the WWE Hall of Fame. Congratulations to the Bushwhackers.
Please Share This