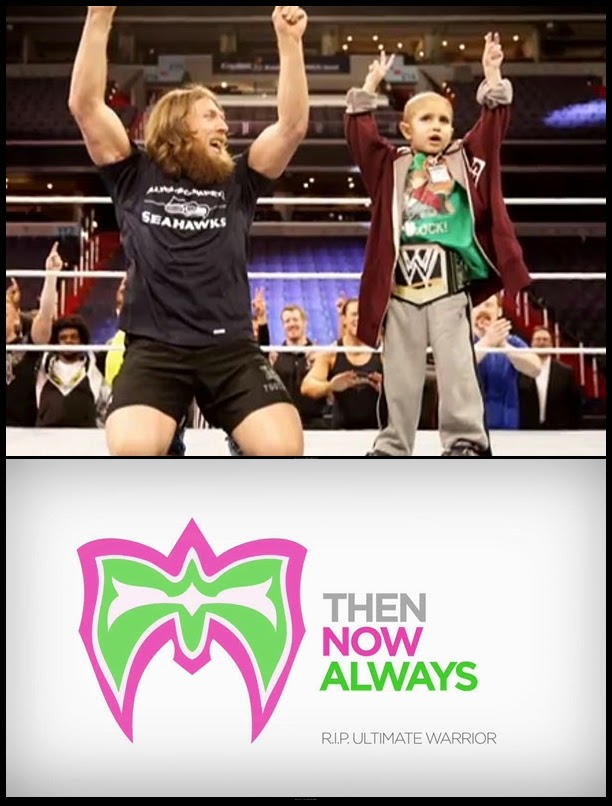 Last year during the WWE Hall of Fame the Ultimate Warrior talked about he would like to see people who aren’t exactly in the ring be awarded for the courage and impact others. While the Warrior was, an eight year old with pediatric brain cancer was sitting in the crowd. Connor Michalek was introduced to the WWE Universe in 2012 when he got to meet his hero Daniel Bryan. Connor was only eight years old when he passed away.  For those who criticize WWE you need to stop and think about all the great things they do for our troops, Make A Wish, and other charities. WWE has put out Connor’s Cure bracelets with all the proceeds going to pediatric cancer research and support. You can donate at https://www.givetochildrens.org/butterflies3?tab=0&frsid=67
I want to go back to the Ultimate Warriors final speech on Raw before died. He said the following:

“No WWE talent becomes a legend on their own. Every man’s heart one day beats its final beat. His lungs breathe a final breath. And if what that man did in his life makes the blood pulse through the body of others and makes them bleed deeper and something larger than life then his essence, his spirit, will be immortalized. By the story tellers, by the loyalty, by the memory of those who honor him and make the running the man did live forever. You, you, you, you, you, you are the legend markers of Ultimate Warrior. In the back I see many potential legends. Some of them with warrior spirits. And you will do the same for them. You will decide if they lived with the passion and intensity. So much so that you will tell your stories and you will make them legends, as well. Ultimate. You are the Ultimate Warrior fans. And the spirit of the Ultimate Warrior will run forever!”

I truly believe WWE is honoring those words and the Warriors memory by following up what he suggested. It was truly Warriors last great act before he died. This is a great to start the Warrior Award and it is very touching. Congratulations to Michalek family. Their son’s memory will live on forever.
Please Share This