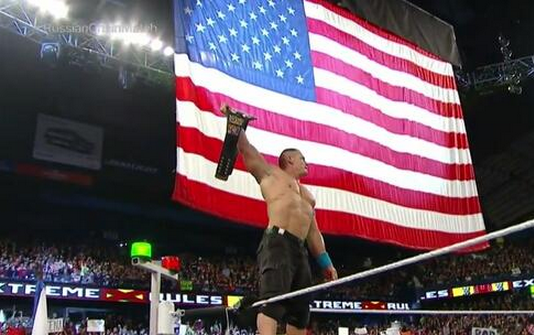 Tonight was the annual Extreme Rules event and I am always curious to see how the pay-per-view after Wrestlemania does. I will always remember when the show was called Backlash and that show was epic. Before I begin with my thoughts here are the results for the evening:

Neville defeated Bad News Barrett
Dean Ambrose defeated Luke Harper in a Chicago Street Fight
Dolph Ziggler defeated Sheamus in a  Kiss Me Arse match
The New Day (Big E and Kofi Kingston) (with Xavier Woods) defeated Tyson Kidd and Cesaro (c) (with Natalya) Tag team match for the WWE Tag Team Championship
John Cena (c) defeated Rusev (with Lana) in a Russian Chain match for the WWE United States Championship
Nikki Bella (c) (with Brie Bella) defeated Naomi Singles match for the WWE Divas Championship
Roman Reigns defeated Big Show in Last Man Standing match
Seth Rollins(c) defeated Randy Orton for the WWE Championship in a Steel Cage
I can honestly say I hated that Cesaro and Tyson Kidd lost the tag titles and Naomi did not win the Divas title. I think heading into the show the Lucha Dragons had a lot of momentum and should have had a tag title show. I understand they are trying to play into the New Day hate but Kidd and Cesaro are solidly the best tag team on the roster right now with The Uso’s on the shelf. I liked what they tried to do with Ambrose and Harper but it wasn’t as wild and crazy it should be.
I have never been the biggest John Cena fan but I love what he’s doing with the United States Championship. He’s defending the the championship on a weekly basis and bringing prestige back to the belt. I am also glad that Neville is getting pushed and possibly could have Intercontinental Championship run in the future. With the future of Daniel Bryan in question. A guy like Neville could really have a bright future with an early title run in his main roster career.
The pay-per-view itself had solid matches but was very un-epic, and lacked the luster that the show after Wrestlemania should have. I am giving it 6.5 out of 10 and I hope in three weeks time at Payback they deliver better. Until then we will have to see how the buildup is for Payback.
Please Share This