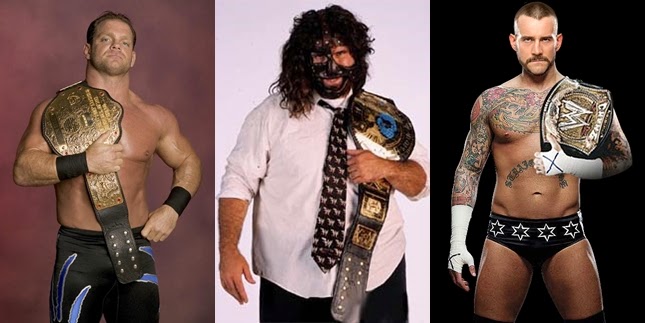 When you think of concussions in professional wrestling, everyone thinks of Chris Benoit, but in my opinion, the issue of concussions goes way beyond the tragedy of Chris Benoit and his family. One of the people I think about the most is Mick Foley, who wrestled as Dude Love, Mankind, and Cactus Jack. Foley has stated many times that it took years off of his life and obviously stated that once he realized he was having a memory problem, Vince McMahon cut him off and said he would never compete again. I always took this a sign that Vince McMahon does care about his performers and does value them as human individuals. One thing that needs to be addressed though is that Foley did all of his crazy moves on his own power with his own decision-making behind. So the question that should be answered is, should Foley sue the WWE, or any other promotion he worked, based on the wrestling he had?

In the minds of Vito LoGrasso, Evan Singleton. Luther Reigns, Russ McCullough and Ryan Sakoda, you should be able to sue the company that gave you employment and a well being, knowing it was a physical profession to get into. These men cannot honestly sit there and say they didn’t realize the dangers of professional wrestling before they entered the ring. Some of the statements I’ve heard are:

”Under the guise of providing entertainment, the WWE has, for decades, subjected its wrestlers to extreme physical brutality that it knew, or should have known, caused created latent conditions and long-term irreversible bodily damage, including brain damage,”

Or WWE has been described as “egregious mistreatment of its wrestlers for its own benefit, as well as its concealment and denial of medical research and evidence concerning traumatic brain injuries suffered by WWE wrestlers”

In the past I do think WWE has not taken care of their wrestlers and let them perform with serious injuries. That was almost eight years ago before the Benoit tragedy occurred. Since then, WWE has increased their wellness policy, their physical examinations and also works with many doctors. The other thing that needs to be noted is that WWE partners with Christopher Nowinski’s Sports Legacy Institute, which focuses solely on head injuries and brain trauma in sports.
Eight years ago, do I think these five former WWE stars should have sued the company for bodily injury? No. Do I think they should now? Absolutely not. These five claim that WWE is in the business of “selling violence.” Guess what guys? You were a part of selling it, so how does that justify your case? This is no different than the NFL, UFC or boxing. They all have risks, and anyone who participates knows the risk before they do it. I do think think that WWE should provide funding for these wrestlers to get treated and tested for any concussion-related issues. I think it would go a long way in showing the company cares and takes care of past and present talent.
I think in some weird, twisted way, the tragedy of the Benoit family has come full circle. The person Chris Benoit was supposed to wrestle the weekend he killed himself, his wife, and his child was supposed to be CM Punk. As we all know, Punk went on Colt Cabana’s podcast and made it very clear the doctors did not treat him. I really think this was Punk’s way of standing up for himself and the boys and was trying to prove that WWE has not changed since the Benoit tragedy.
I applaud CM Punk for trying to stick up for his friends and former co-workers, but WWE has proven that if you suffer a concussion or major injury, they don’t let you perform. Ask Randy Orton, Wade Barrett, Daniel Bryan, Dolph Ziggler, and Roman Reigns. All of them have had significant injuries in the last few years, and none of them were put at risk.  If you’re in the WWE, NFL, UFC, or professional boxing, I don’t have much sympathy for you, unless you sign a contract that states that your sports organization or team will cover your medical expenses.
These athletes know the risk involved when they sign up to perform or play a sport. If they don’t want to get hurt, then don’t participate or learn to take better care of yourself. If a judge rules against WWE, this will set an ugly precedent for pro wrestling in general. It would allow independent wrestlers to go after independent promotions anytime they got hurt, when clearly it was the choice of the wrestler to go perform for that promotion. It’s going to get to a point that independent wrestling promoters are going to have their performers sign waivers not holding them liable for injuries that occur in the ring.
Whether or not these five wrestlers win their lawsuits remains to be seen. I think it’s a way for them to get money and a little bit of attention. I noticed that a couple of these wrestlers are still taking bookings and working on the independent scene. How is a judge going to look at that? My guess is not very favorable. Concussions are a very serious issue and should not be taken lightly. They should be treated and dealt with at the time of the event, not many years later. If these five wrestlers filing a lawsuit had an issue, it should have been dealt with during their time with the company, not ten years after the fact. Stay tuned for more on this issue as hopefully we reach a conclusion in months to come! Be safe, be strong and believe in yourself. Controversy Doesn’t Come Without Criticism!
BoxingNFLPro WrestlingUFCWWE
Please Share This