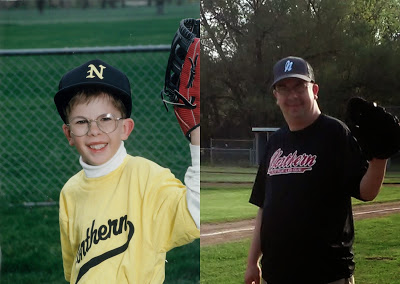 In the early 90’s I was inspired by how great of a pitcher my brother was. He was a great baseball player that loved to play the game. Having congenital heart disease I knew it was nearly impossible for me to play at such a high level. My mom knowing how much I loved the game of baseball signed me up for t-ball and I absolutely loved it. I played for two years with Screen Ideas where my coach was the late Jim Schmidbauer. I eventually had to stop playing because physically I could not keep up with the other kids my age. I always loved my time at Riverside Park whether it was watching my brother play or on the diamond playing myself. I looked up to my brother so much I even wore the same exact number as he did. At one time we both wore the number eleven. That number will always mean a lot to me.
Many years later I revisited Riverside Park and watched today’s youth play on the same ball-fields my brother and I did. Northern Little League has seven divisions for baseball and five for softball. The age range is from 4-18.  Riverside Park has always been a beautiful location and such a great atmosphere to be around. Northern Little League has been running since 1953 and on average has hosted baseball for 300 kids each season. It’s so great that over 20 years later kids are still excited, and passionate about playing baseball by the river. It was so great to see these kids put their hearts and souls into making their family and friends proud.
The great thing about Northern Little League is that it’s a non-profit organization that is ran by volunteers. Their seasons depend on sponsor donations, registration fees, concession stand profits, and several fundraisers. If you live in the Grand Rapids area I would suggest signing your kids up in this league, take some time to volunteer or even come out and watch a game. I have so many fond memories of my time in Northern Little League. I hope someday my children will be playing on those same ball fields.  For more info please go to www.NorthernLittleLeague.com Let’s play ball!
Please Share This