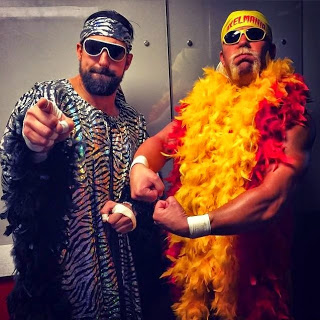 When I think of Damien Sandow and Curtis Axel I think of two of the most technically sound and underrated performers on the WWE roster. Sandow had a great run as the Intellectual Savior of the Masses but when he failed his Money in the Bank Briefcase cash in a couple of years ago it really derailed any momentum he had. He then began imitating people and eventually became the lackey for The Miz. As for Curtis Axel, he was Michael McGuillicutty for the longest time. I always thought he should have been Joe Hennig and used his fathers name to build his career. They eventually broke the McGuillicutty name and he become Curtis Axel, a Paul Heyman guy. His momentum with Heyman at first was very strong but eventually was killed by being CM Punk’s punching bag after Punk’s match with Lesnar at Summerslam 2013.

I truly believe when Curtis Axel start Axelmania it wouldn’t have caught on and taken off. the way it has. It made sense once Damien Sandow broke away from The Miz to put him with Axel and play off two of the biggest WWE Legends in the history of the company. Some people think it’s an insult and disrespectful but I truly believe it’s keeping the legacies of both men alive and doing it in a comedic way. I think it’s great that before Wrestlemania 31, Hulk Hogan got involved with Curtis Axel and had some fun with the character Axel was trying to pull off. It is no secret that Hulk Hogan had a lot of respect for Curt Hennig and probably wants to help Joe Hennig out anyway he can.

I believe if this story and these characters are done right I could see it going for quite awhile and letting this build both men’s careers. I am not sure where Damien Sandow’s career could go from here but Curtis Axel should eventually be in a singlet and doing the perfect plex to put his opponents away. I believe if Charlotte can be like her father, if Nattie and Tyson can be like Bret, then their is no reason why Curtis Axel can’t be like his father. Right now this could be the perfect thing to get Sandow and Axel where they need to go. Only time will tell to see if The Meta Powers will become a mega thing in the WWE.