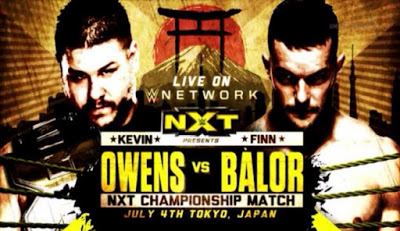 On July 4th WWE will be live on the WWE Network from Tokyo, Japan and it promises to be a spectacular show. Japan is very well known for it’s traditional pro wrestling roots and is more about the wrestling then it is about the entertainment. WWE has put a lot of effort into making this a pro wrestling show. Here is the card and my thoughts for July 4th in Tokyo.
WWE NXT Title Match: Finn Balor vs. Kevin Owens
I truly believe this is a win-win for everyone involved. I believe Finn Balor will walk out new NXT Champion but it reassures us that Kevin Owens is on the main roster permantly and has a real shot to defeat John Cena at WWE Battleground on July 19. The founder of the Bullet Club is coming home and his return will be grand.
WWE Divas Title Match: Naomi vs. Paige vs. Nikki Bella
The Japanese fans appreciate great wrestling and the best wrestler in this match is Paige by far. I believe this her chance to shine again and become the most dominant Diva in WWE. I believe that an NXT Diva or two could have an affect on the outcome of this match especially if they’re related to Flair
Brock Lesnar vs. Kofi Kingston
I can sum this very simple. Kofi Kingston is going to be destroyed! If the New Day gets involved then it’s the end of them as we know it. There will be no new day tomorrow once Lesnar gets his hands on Kingston. I’ll give this match no more then five minutes. If it goes longer I will be shocked!
Neville vs. Chris Jericho
This could definitely be the match of the night and possibly match of the year. Y2J has very strong roots to Japan and I hope we see the return of Lionheart, Neville has had some great matches thus far in WWE but I believe this one will put him to the test. Neville will win and continue to build his momentum forward
John Cena and Dolph Ziggler vs. Kane and King Barrett
A very random match you might only see at a typical WWE Live Event. This is not a typical live event considering it’s being aired on the Network. It’s very simple. All four men are main event caliber performers and they will have a great match. I have a feeling with Ziggler re-signing with WWE that he will be the shining star in this match and probably get the victory.
The Lucha Dragons vs. Big E and Xavier Woods
If Kofi’s match is before this one then there won’t even be match because Lesnar would have already destroyed everyone. Unfortunately I cannot be that luck and we will see all of New Day. Even so I still think New Day Sucks and the Lucha Dragons will prevail.
Cesaro vs. Diego
I am only going to assume that this match was thrown together to have some international appeal. Don’t overlook this match because both men are extremely talented. This could be the very thing Cesaro needs to get back some momentum as a singles competitor.
It’s going to be fun watching this unfold on the WWE Network. I think it’s going to do mega numbers which will lead to other future WWE special events like this. There will be fireworks in American on this day but watch out Japan because there will be a WWE explosion when they throw down in Tokyo.
Please Share This