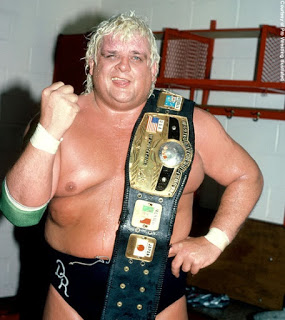 By: Brent Schrader
Today the WWE and wrestling in general lost a true legend of the craft. Born October 12th of 1945 in Austin Texas and named Vigil Riley Runnels. Dusty Rhodes is one of the most charismatic superstars to have ever walked the face of the Earth. Billed the son of a plumber, Dusty was a pioneer of what a promo should be.

He started off in the AWA as a villain and soon he grew in popularity and the boos turned to cheers. The crowd fed off of his charisma and the blue collar persona that he portrayed. Soon Dusty became a main event attraction in any of the regional promotions that he visited. With a look that wasn’t common for a superstar and the agility and stamina of a wrestler that is 50 pounds lighter. Dusty put on main event matches with some of the all time greats around the country. Names like Ric Flair, Eddie and Mike Graham, and even had two title matches for the WWWF championship against Superstar Billy Graham. He was regularly going 60 minutes on a nightly basis with any and all challengers.

His schedule remained blue collar and hard working through the mid 80’s. Dusty cut promos that kept the crowd on edge and soon started getting world championship opportunities. He soon began a legendary rivalry with Ric Flair that spanned the better part of the 80’s and saw Dusty use his Bionic Elbow to put away many opponents and capture the NWA World Heavyweight Championship on two occasions. His “Hard Times” promo was well ahead of it’s time and saw Dusty use his slow delivery on his promos and his intensity to garner the reputation of being one of the best mic workers in the business.

During the late 80’s Dusty found himself in a bigger backstage role as well as being in front of the camera. As a booker he actually won Wrestling Observer Newsletter’s Booker of the Year in 1986. He was credited as Virgil Runnels so his persona as Dusty Rhodes was protected.

The 1990’s was a different time for Dusty. In what almost seemed like a joke the WWF brought him in. He was still under the guise of a blue collar worker. But with polka dots. Still with Dusty’s charisma, and his hard work ethic this gimmick soon got over with fans much more than Vince McMahon ever thought it would. He had a feud with Macho “King” Randy Savage with Sensational Sherry with his own valet Sapphire getting involved in the feud and helping to propel Dusty to a WWE darling. Soon he dropped the polka dots and feuded with the Million Dollar Man which saw him bring his own son Dustin into the fray. Soon after this feud Dusty left the WWE in 1991.

He went back to World Championship Wrestling as a booker and part time wrestler, even teaming with his son . He ended up managing various stars and even had a run in the NWO as he accompanied Hall and Nash to the ring. This saw Dusty take on the role of a heel for the first time in nearly 20 years. This run wasn’t very memorable however and soon Dusty left WCW for a brief run in ECW, then returned once more to WCW towards the end of WCW’s run and feuded with Ric Flair.

After WCW’s demise Dusty worked in various independent territories and also worked in TNA as their head booker and head writer. While still making random appearances in the ring. He left TNA in 2005 and wrestled in many independent promotions until returning to the WWE in 2005.

Dusty returned and appeared on TV many various times from 2005-2015. Most notably working with his sons Cody and Dustin and being in their corner when they beat the Shield for their jobs back in 2013. Dusty last appeared on Monday Night RAW in February of 2015 trying to keep the Rhodes brothers together.

Although Dusty tragically passed away June 11th 2015 of kidney failure. He was a mentor to many, a father to his own and a true legend of wrestling. He will be missed by many who saw him and lived their childhoods partially through him. He truly did embody the American Dream. His legacy will live on. Through his memories, through his life and through his family. He would want it that way.

We at Hollywood’s World of Sports send our deepest sympathies to Dusty Rhodes family, friends, and WWE Universe. He embodied the American Dream and had one of the most legendary careers anyone could ask for. My thoughts and prayers are with the Rhodes family especially to Cody and Dustin who now will grace the squared circle for the first time without their father being there for them. May God Bless you and comfort you both anytime you step into the ring and think of him.
Joey Williamson 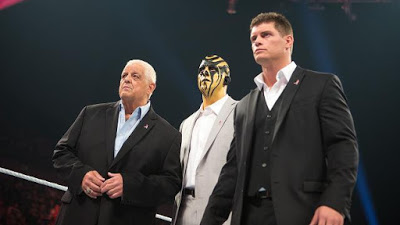