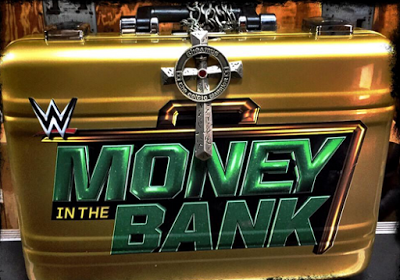 Tonight was the annual Money in the Bank pay-per-view. This was the 16th time that there has been a Money in the Bank Ladder match and I have to say the winner was quite shocking. There was a few surprises tonight that threw me off guard. Before I get to my thoughts here are the results of the show:

I love that they did some fitting tributes to the American Dream Dusty Rhodes. The Money in the Bank match was really good. I was really shocked that Sheamus won the briefcase and also really surprised they are doing a Roman Reigns-Bray Wyatt feud. Is it possible that the stars are aligning for the Wyatts and The Shield again? As much as I disagree with the decision for Kevin Owens to lose he still has so much momentum. His post match actions against Cena made him more of a heel then he already was. I absolutely love the WWE World Title Ladder Match. Ambrose and Rollins have such great chemistry together. I think they are a modern day Bret and Shawn only difference is that they don’t have heat with each other. Rollins win and no cash-in. I am actually shocked with how brutal the ladder match was. I think they missed a little bit of an opportunity there.

The only thing I don’t like about the Divas Title feud is that the women of NXT need to be coming up and taking the role of change on how women are viewed in WWE. The women in NXT are the ones making the real changes. I don’t like how there was two matches that ended oddly and in controversy. I don’t think they did the Intercontinental Championship match because the IC title matches are suppose to be classic technical contests. I like Ryback but he should not be the Intercontinental Champion. Neither should Big Show, Miz, Mark Henry or anyone else of that nature. That’s why the United States Championship is there. Guys like Neville, Barrett, Ziggler, Rusev, and others should be competing for the Intercontinental Championship. It is what it is and Ryback is a feel good story right now.

The pay-per-view as a whole had some bright spots. Some definite feuds were set up for the next few weeks and into Summerslam. I would have to give the show a 7 out of 10 for some surprises and a lot of decent matches.