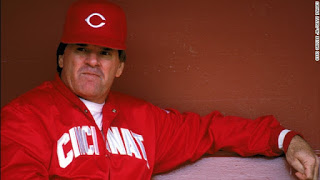 Well, it’s almost time for Major League Baseball’s All-Star Game. This year it will be played at Great American Ballpark in Cincinatti Ohio. Unlike other years, when the spotlight is on the players as it should be. This year the spotlight has shifted to one Pete Rose. Rose will be allowed to take part in the events of the 2015 All-Star Game and will be applying for reinstatment into Major League Baseball. Rose was banned for life for offenses back in 1986 that came out in the Dowd Report released in 1989 that stated he bet on baseball.

Ok first off. Why should this be brought up now? Pete Rose has been trying to get back into baseball ever since he was banned for life. It’s taking away from the players and their accomplishments leading into the All-Star Game and will take away from the attention they should be getting. Why not wait until after to discuss this issue? But since it’s being brought up beforehand. Allow me to give you my opinion.

If you’re going to allow Alex Rodriguez to swing a bat. Allow many of the other PED users. Ryan Braun, Jhonny Peralta, among others. To come back after using PED’s, which will also directly impact the outcomes of games. Then why not allow Pete Rose to be reinstated? Pete firstly, never bet AGAINST his team. While playing or managing. He always played hard and tried to add on to his own hits record. Secondly Pete has been banned for 26 years from baseball. Which means no Hall of Fame. I say this. If you don’t allow the all time hits king into the Hall Of Fame, for betting for his team to win. Then why do you have a Hall Of Fame? How many other HOF’ers did things to impact the games? Are we really stuck back in 1919 and the Black Sox scandal on betting? Have the times in baseball really not caught up past that?

Did Pete Rose deserve to be punished. Hell yes. Did he deserve to be suspended? Hell yes. But a lifetime ban? Hell no. Pete has paid his dues. He’s been barred from almost anything to do with the game and needs special permission from the commissioner to attend anything. People talk about the integrity of the game. How about the Yankees moving in the right field fence to give Babe Ruth more home runs? How about the pitchers that continued to doctor baseballs and were even caught or admitted to doing it. Some of them are still in the Hall. Gaylord Perry anyone? Let’s take a look at what started the stigma against betting on baseball shall we?

The Black Sox scandal of 1919. Perhaps the blackest eye in the game’s history. A number of players including all-time great “Shoeless” Joe Jackson were given sums of money to throw the 1919 World Series by mobster Arnold Rothstein. The Chicago White Sox did end up losing the series 5 games to 3. However if you look at the facts of that series you’ll see one glaring thing. Joe Jackson’s performance. He set a series record with 12 hits. He hit the series only home run. He also hit .375 in the series. Now it’s said he did a lot of this with the outcome already decided. I don’t care. These boys, including Jackson. Were being paid large sum’s of money for their time, to throw games. And if they didn’t. They would be threatened, their families were threatened, their lives were threatened. The Game 8 starter, Lefty Williams, had his wife’s life threatened before Game 8. These boys were faced with either throw the games, or they had a gun to their heads. What else would anyone do in that situation? Some of them may have happily taken the money or whatever. But there were threats and there was corruption. No doubt about it. Should they have been disciplined. Hell yes. But in the case of Jackson and a couple of others. They should not have been banned for life however. What does one do when faced with a loaded gun? All those so called “purists” would’ve thrown those games also. And no one out there could tell me they wouldn’t. I firmly believe Joe Jackson should ALSO be in the Hall Of Fame.

Which brings me back to Pete Rose. While he didn’t throw any games. He did owe money to a lot of shady characters. People that would knock on his door and break his legs if he didn’t pay. This was Rose’s own fault, admittedly. However once you’re in that lifestyle, those boys don’t want to let you out either. Who’s to say if Rose was threatened and forced to keep gambling? Only he could tell you that. We just don’t know everything about his situation I’m sure. That’s only my speculation however.

In the end. I feel the lifetime ban should be lifted from Pete Rose. I feel he should be allowed in the Hall Of Fame. As should someone like Joe Jackson. Nothing they did off the field ever took from their on the field abilities and accomplishments. For those reasons alone they should be allowed in the game. And in the Hall Of Fame. Especially when they alone, still competed to the best of their abilities at all times.