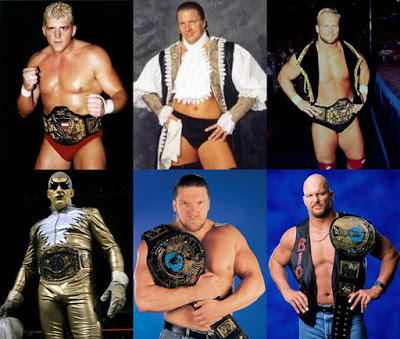 As I’ve been sitting watching the WWE Network and watching the old WCW and WWE stuff it dawned on me that WCW tried so hard to load up on talent they paid no attention to the talent they had that were there before 1994. From 1993 through midway of 1995 WCW lured away Gene Okerlund, Bobby Heenan, Haku, Hacksaw Jim Duggan, Big Bossman, Earthquake, Nasty Boys, Brutus Beefcake, Macho Man Randy Savage, and Hulk Hogan. Even before those names arrived Rick Rude and Jake Roberts showed up as well. While all those names are legend and had great careers WCW paid no attention to three men they released. Within a six month period Dustin Rhodes, Jean Paul Levesque and Stunning Steve Austin all left WCW and headed to WWE which changed the course of pro wrestling history.
Most people would never out Goldust in the same sentence as Triple H and Stone Cold but Dustin Rhodes was a great talent in WCW. He held the United States and Tag Team Championship. He wrestled some of the all time greats. When Austin was the Ringmaster and Triple H was the blue blood Hunter Hearst Helmsley, WWE had created Goldust. Goldust ushered in an era of controversy, criticism and made a lot of people uncomfortable. It was a far cry from Dusty Rhodes kid. He brought the attitude era in before the era had that name. He was a multiple time tag team champion and Intercontinental Champion during his time in WWE. He will always be remembered for pushing the envelope and crossing the line in his early days as Goldust.
People can say what they want about Triple H and how he’s a McMahon but talent speaks for itself. I think a lot of people knew he was a star as Jean-Paul in WCW. He had a good tag team with Lord Steven (William) Regal before his departure. I think those two could have done some great things together but Triple H did go on to do a lot of great things in WWE as an in ring competitor and now as the man behind NXT. He truly has a mind, heart and passion for the business. I can only imagine how the passion would have beneficial to WCW if they would have paid more attention to him as a competitor and a man who loves the business.
Steve Austin was and always will be stunning even before he was Stone Cold. Austin held every title in WCW except the World Heavyweight Title. They must have thought something of him to give him  the other three titles. He out worked, and out wrestled a lot of others in WCW during his time. He was part of the Dangerous Alliance and Hollywood Blondes during his time in WCW. He went on to be the greatest WWE Superstar in the history of the company. He made so much money, drew so many people in and raised more hell then anyone has ever seen or ever will see again. He could have been a huge success in WCW if he would have been used more properly.
There were a lot of people who switched sides, defected from one to the other and went for more money but these three were well known in WCW and became famous through WWE. The other two guys that I think of when I think of WCW dropping the ball are Mark Callaway who became The Undertaker and Cactus Jack who also went under the Dude Love and Mankind characters in WWE. However it was in the heart of 93 through 95 that these three went unnoticed, unappreciated and underused in WCW. Ultimately WCW loss everything and these three men became three of the biggest legends in pro wrestling history. That made that you’ll never forget their names, their faces and their careers.
Please Share This