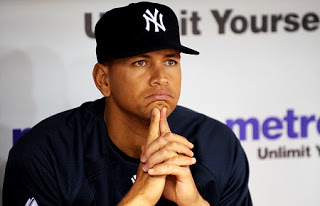 With the MLB All Star Game looming just a mere seven days away. There’s been a lot of media hype surround Cincinatti for various reasons. We will see the Home Run Derby. We will see Pete Rose make a triumphant return to what was once his city. And yes, we will see the All-Star Game itself. Where the National League takes on the American League for homefield advantage in the World Series. The teams have been chosen and there have been a few surprises that made the team. There is one big surprise however, in who was left off. Alex Rodriguez, did not make the AL All Stars.

Now I know a lot of people will state. “So what. He didn’t make the team. The guy is a cheater!” I say this about the All-Star games and the Hall Of Fame. If you dig really deep and take out everyone who was dirty and didn’t use anything to get an edge in the game. Take them all out of the All Star Games and out of the Hall Of Fame, you’ll have a few empty Hall Of Fame and very few people on the All Star teams. So please check your morals at the door.

Alex Rodriguez deserves to be there. Plain an simple. His numbers. .283 batting average. 16 home runs. 47 RBI’s. While not earth shattering. Are pure and very strong numbers alone at this point in the season. And sure if you put him up against Nelson Cruz and Prince Fielder. The two DH’s on the AS team. His numbers aren’t quite up to par with those in his specific position. However, you could surely make a case for him against some of the reserves.

A-Rod versus Brock Holt. I have seriously never even heard of Brock Holt until he was elected to go to this years All Star team. But look at his line. .294 batting average 2 HR’s and 21 RBI’s. and a .802 OPS which is nothing compared to A-Rods .902 OPS. Yet A-Rod is out and this guy is in. The AL has many relief pitchers in. Brad Boxberger? Who is that? Who the hell knows. One of the most under the radar closers in the game makes it to the game and is stunned when he gets the phone call stating he made it. He gets in and A-Rod is shunned. John Kruk made one of the dumbest statements on ESPN when he stated the number don’t back up A-Rod getting in. Ok they sure in the hell don’t back up Brock Holt or even Russell Martin compared to A-Rod. But yet Yost snubbed him in favor of his boys or another fielder.

Which all of this makes me wonder. Has A-Rod been blackballed here? He didn’t even get a shot at making it with the AL’s final vote. I have an odd feeling that with his past even if he had a .340/25/65 line right now. He wouldn’t make the team anyway. Just purely because of his history. And it’s not right. He’s an all-star personality. He’d put asses in the seats. And we all know this year is pure. The guy’s urine has to be like spring water for him to even be able to play. I frankly don’t find it right. He’s almost 40, and he’s putting up these kinds of numbers. We know A-Rod will be retiring soon. One more All Star game would’ve given him some sort of redemption for his past. However with 14 All Star Games behind him. It’s not something I’m sure he’ll be missing much sleep over.

The HOF snub that may come after he retires might be a different story however. Let’s just hope this isn’t the trend for a player who would’ve had the numbers no matter what era he played in.