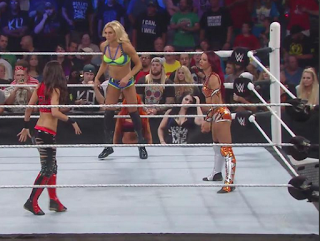 Tonight St. Louis was the place for a perfect Battlegound. This was the best opportunity for WWE to build up for WWE’s Summerslam. Before I begin here are the results:

I was really happy to see the Prime Time Players retain the Tag Titles. They have been a team far too long to have a 5 week reign. It’s very well deserved and until The Uso’s are back, they are the best team in the division. I think the invasion of the NXT Divas is the best things that’s happen to the Divas Division in a long time. Banks, Lynch and Charlotte are the fuel to the fire that the Division needs so it was good to the daughter of Flair win her first WWE pay-per-view match. I love the fact they kept up with the Intercontinental Title storyline when Big Show knocked out The Miz. Hopefully we will see that match down the road.

It was really disappointing more people weren’t into the Roman Reigns-Bray Wyatt match until the end of it. I personally didn’t it was that bad of match. I really wish people would stop hating on Reigns. I got it at first but the guy is working his butt off. He’s done more then anyone has asked for since Wrestlemania so he needs to be given the shot that he originally was suppose to have. I personally don’t Wyatt-Reigns should have been booked to begin with. A lost by either guy would kill a lot of momentum for where their suppose to go. I am absolutely disgusted that John Cena went over on Kevin Owens. He got to kill the momentum of Rusev at Wrestlemania and now he got to derail Kevin Owens early WWE career. This really feels like a Vince McMahon decision and that’s why he needs to step down and let Stephanie and Triple H run the company.

In the Main Event, Seth Rollins was dominated Brock Lesnar in the early going. Rollins had some offense but Lesnar dominated. It looked like Lesnar had the title won until the gong hit and the lights went out. The Undertaker appeared and did the Tombstone to Lesnar twice to end the show. Overall with all the hype, rumors and attention this pay-per-view was getting it was kind of a letdown leading up to Summerslam. Yes, The Undertaker showed up but that was spoiled by all these “journalists” who reported that The Undertaker and Sting would be at Battleground. This is another reason why I hate all the pro wrestling “journalists.” They make up garbage, then the fans buy into it and then when it doesn’t happen the fans crap all over the product or when it does happen it’s not a surprise any longer.

Overall I would give the show 6 out of 10 for not living up to the hype and for WWE allowing their surprises to be leaked. I truly hope the next four weeks of television builds up Summerslam to be a great show because tonight did very little to do so. Summerslam is four weeks but until then soak in what you saw tonight and hope for better the next time around.