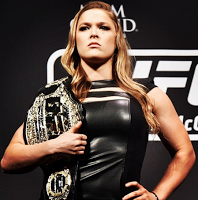 When Ronda Rousey first entered the world of MMA I was very skeptical because of all of the hype surrounding her. The only woman prior to Rousey that I took seriously was Gina Carano. Rousey kept getting win after win and did it in very convincing fashion. At UFC 190, she totally embarrassed Bethe Correia in 34 seconds. This was after Correia talked so much trash about Rousey and her family. Why do they always go after her family? It’s not her family that they are fighting. Rousey’s dad did commit suicide when she was just a girl but do you think bring that up really does anyone any favors or gives them a psychological advantage? It probably does that exact opposite. It is probably the fuel that fires up Rousey to kick the crap out of her opponents. The evidence is very clear throughout Ronda’s career.
Rousey is undefeated in MMA and until she is defeated what can really anyone say about her. She’s cocky, confident, and cool but she can back it up. I can’t remember a fight that Rousey has had where her opponent hasn’t attacked her family in some way, shape or form. If I was training a fighter that was scheduled to go against Rousey I would tell them to keep their mouth shut and focus on training for the fight. Words aren’t going to beat Ronda Rousey. Only a submission or knockout will beat Ronda Rousey. She’s taking down Corriea, Carmouche, Tate, Davis, Kaufman, and Zingano. There is one woman that she hasn’t faced and that is the very outspoken “Cyborg” Cristiane Justino. Cyborg claims she will retire Rousey like she did Carano and be the one to embarrass Rousey. I’ve heard that so many times and not one person has even come close to embarrassing her.
Fellow female fighters aren’t the only ones who have been talking trash about Rousey. Floyd Mayweather Jr. and Ronda Rousey have been verbally jabbing at each other for awhile now. Mayweather has bragged about making millions in 36 minutes while the UFC responded with the fact that it only takes Rousey less then a minute to get her job done. Floyd Mayweather is a great boxer but he in no way would ever last in an octagon. In my opinion he’s no better then her opponents who talk all their trash. I really hope fellow female MMA fighters in the future will just shut up before the fight and focus on their training camps. Maybe if they do that, they might make it past the first round. Amanda Nunes said it best after she defeated Sara McMann, She will not trash talk her way into a title shot. She will do her talking in the octagon. I think every female fighter should have that approach against Rousey. Focus on your training, enhancing your skills and study how to beat your opponent. Right now Rousey is on top and dominating the MMA scene. I don’t see her being knocked down from that spot anytime soon.
Please Share This