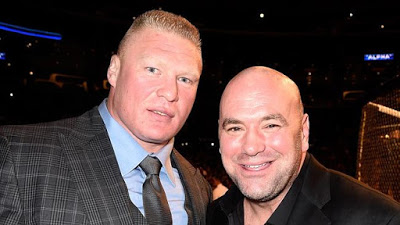 I have always been both a WWE fan and a UFC fan. I think both companies and industries are unique forms of entertainment that require a lot of athleticism. Late last week UFC President Dana White called WWE fake and has been critical of the WWE Network since it inception. Not only has Dana upset the WWE fans but some of the biggest names in the industry. Their are guys like Mick Foley, Sheamus, Seth Rollins, Bubba Ray Dudley, Austin Aries and many others.
The timing of these comments was not very good at all because former UFC fighter Wanderlei Silva says he has proof that UFC fights have been fixed in the past. It also is funny to me that he’d make such comments consider that the biggest draw the UFC ever had was WWE Superstar Brock Lesnar who took on the likes of Shane Carwin, Frank Mir and Randy Couture. I still truly believe if Lesnar’s diverticulitis wouldn’t have been an issue he would still be dominating the Heavyweight Division. If that doesn’t top the hypocrisy chain then maybe signing CM Punk who competed in WWE for 10 years before quitting the company. I am a huge Punk fan but he has no MMA record or experience and he was still signed. I wonder if he’s told Dana how brutal the WWE schedule really is.
Finally, if Dana White really felt like WWE was “fake” why won’t he let Ronda Rousey compete in Wrestlemania 32 next year? It’s simple because while it is scripted entertainment the physicality and athleticism is real. I think Dana deep down is scared he’s going to lose one of the biggest attractions he’s ever had in Rousey. Rousey got a great reaction from the WWE crowd during her appearance at Wrestlemania 31 and the WWE Universe already love her. It terms of Dana knocking the price of the WWE Network, I think 9.99 is a great price and a fair bargain. If Dana White and the UFC ever start their own network and think people are going to pay over 10 dollars a month for a network that doesn’t include pay per views he’s insane.
As I said before I am a huge supporter of the UFC and WWE but talking trash about each others product only proves your scared of that product. You don’t see Vince McMahon or WWE executives talking trash about the UFC. I personally think the two should work to cross promote and work together on building each others brands bigger and better. Maybe someday that will happen but for now Dana White should choose his words wisely and big smarter battles. He’s got enough on his plate as it is with running a major sports organization. Let MMA be MMA, and let pro wrestling be pro wrestling. Both are good forms of sports entertainment.
Please Share This