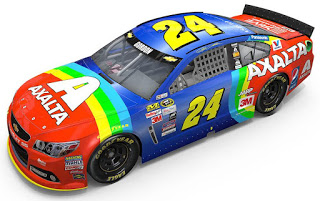 If I were you tell you that I was a diehard Jeff Gordon fan growing up I’d be lying through my teeth. If you were to ask me if I respect Jeff Gordon’s legacy and what he’s done in the sport of NASCAR I would say yes. Jeff Gordon’s started in he NASCAR Sprint Cup Series in 1992. Ironically enough Gordon’s first race was Richard Petty’s last race. In the last 23 years he has won four championships, ninety two wins, and eighty poles. He’s also won three Daytona 500’s and five Brickyard 500’s. Some might say he was the most dominant driver of the 90’s and early 2000’s.
At the height of Gordon’s career and his accomplishments he stood out because of his skill and the color scheme of his car. For a big portion of Gordon’s career he was sponsored by DuPont and had the colors of the rainbow is paint scheme. Gordon’s team and crew were dubbed the “Rainbow Warriors.” The people who love Gordon stood by these colors all the way and those who hated Gordon found every way to pick on the team. Jeff Gordon rivaled the late Dale Earnhardt and won most of his races in these colors. When you think Jeff Gordon, most people think the Rainbow Warrior car.
On August 22nd 2015, when NASCAR goes under the bright lights of Bristol Motor Speedway Jeff Gordon will run with the iconic and legendary paint scheme one last time. Gordon has struggled this year but hopefully driving this car will snap him out of it. As I said before, I am not a diehard Gordon fan but I am a fan of nostalgic acts and it doesn’t get anymore nostalgia then Jeff Gordon’s Rainbow Warrior Car. I personally will be rooting for Gordon to win this race. He deserves to have one big highlight in his last year and this would be one for sure.
Jeff Gordon will retire at the end of this year at 44 years old. He will be joining NASCAR on FOX in 2016 as a broadcaster. Whether or not you like or dislike Jeff Gordon you can’t deny how much he has brought to the sport of NASCAR. He will go down as one of the all time greats in the sport. Even though his career is coming to an end I will enjoy and live in the moment of the return of the Rainbow Warrior.