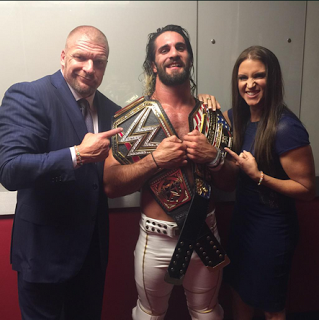 This weekend was a huge weekend for the WWE. They had NXT on Saturday Night, they have Monday Night Raw tomorrow and tonight they had WWE Summerslam. One thing that is really awesome is that all three events are in the same arena. Going into Summerslam they had to follow a great NXT Takeover show. Could it be done? Well before I begin here are the results of Summerslam:

I didn’t have a lot of disappointments but I felt Stephen Amell should have gotten the pin on Stardust because it was a one time deal. I have to give props to Cody Rhodes for not backing out on this character after Dusty passed away. He told wrote in his eulogy to his dad that he was going to finish what he started and I think this is what he meant. Where Cody goes from here remains to be seen but he still has one great career ahead of him. I hate to say it but I was not impressed the Intercontinental Title match at all. The Intercontinental Title match is suppose to be a wrestling classic and that was far from a classic. The Intercontinental Championship is a complete joke right now and this match really proved it. I am all about the Divas Revolution but Team Bella should have been eliminated first, not Team B.A.D. This revolution was about Team B.A.D. and Team PCB, not the Bella Twins. The only satisfaction is that Team PCB won the match.

I really wish Cesaro and Owens would have gotten more time. I also feel like the creative and booking team really don’t know what to do with either guy. I truly believe Owens should have won the United States Title when he was feuding with Cena and Cesaro should be competing for the World Title or Intercontinental Title. I really hope these two get more opportunities in the future. I am also glad Triple H protected Owens because two loses back to back on a big weekend would have just about killed any momentum Owens has had since being moved up to the main roster.

I loved the opening match because it was physical and even had a little bloodshed. Sheamus needed that win for momentum as the Money in the Bank Briefcase holder. The tag team title match was all over the place and had some scary moments. In the end The New Day used some sneaky tactics with some cheap heat and got back their tag team championships. I really would like to see The Ascension get in the mix for the tag team titles. They are a great tag team and probably the most underused tag team in the division right now.  Speaking of tag team matches I really thought the Wyatt Family and The Shield had a great match. A lot of action and craziness going on in one match. It was great to see Roman and Ambrose get the victory despite the stupid fans reaction to Reigns.

The WWE Championship match is exactly what it is suppose to be and that’s an epic classic. Seth Rollins brought his A game and proved he is main event material. This match had a great story, and some really great action. I had a feeling something was going to happen in the match but I did not think for one second that Jon Stewart would cost John Cena that match. What a great swerve by the WWE to shut the fans up. Seth Rollins now holds the World Heavyweight Championship and the United States Championship. The only negative side to this is that the angle was already done in Ring of Honor by Jay Lethal who holds the ROH World and TV Titles. Other than that a classic match that will definitely be talked about for a long time.

The Main Event was the match too big for Wrestlemania. The Undertaker and Brock Lesnar fought each other tooth and nail in the beginning. Lesnar didn’t even wait for Taker to finish his entrance. This match was not one sided like I thought it would be. Lesnar started bleeding which made for even more of an epic encounter. There was so much trash talk, so much brutality and so much intensity in this match but the ending absolutely sucked. They showed the replay which makes for more controversy. The Undertaker tapped out but the referee didn’t see so the match did continue and ended up leading to an Undertaker victory. I really don’t know what to think about this match now or it’s ending.

Summerslam definitely lived up to most of the hype and needed to after what NXT did the night before. The crowd was red hot for the entire night. If the crowd is hot, the show is usually good. The show from start until the finish was really good. I didn’t mind Stewart’s involvement but the way The Undertaker won his match was handled really badly. I think he should have cleanly without controversy. Because of the ending and a few other booking decisions I will give Summerslam 7.5 out of 10. I would have given it more if it weren’t for the ending. The ending to the main event tanked the show a little bit. With that being said WWE did bring the heat in the hottest show of the Summer and hopefully NXT and the main roster of WWE will continue to put on good shows. Night of Champions is right around the corner and I will be curious to see how title pictures shape up. Until then Summerslam is in the books and we build towards the next big pay-per-view in Survivor Series.