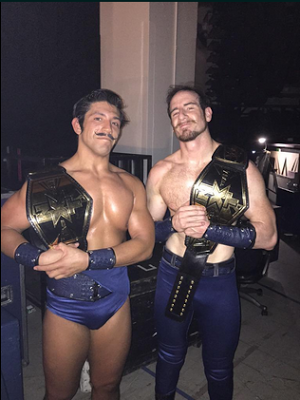 Summerslam weekend is always a huge deal but it got bigger with NXT Takeover Brooklyn. This is the first time that NXT has been paired with a big WWE pay per view. Before I begin my candid thoughts here are the results of Takeover:

As much as I respect Liger I don’t understand putting him over on Breeze unless their is a rematch. Breeze does deserve a spot on the main roster and feel he would do well there. He’s been in FCW/NXT for a long time now so how much longer does he really until he makes it to the main roster or call it a career? This is really the only complaint I have with the show. There were a lot of positives on this show.

I am so happy The Vaudevillians finally got what they rightfully deserved. They have been on the tag team scene in NXT for awhile now. I also enjoyed the debut of Apollo Creeds(formerly Uhaa Nation). This guy is a heavyweight who moves like a Cruiserweight. All I have to say is it’s about time that Baron Corbin got a great match that lasted more then a minute. Samoa Joe really brought the best out in Corbin. Corbin needed a match like this to prove he can hang with the best.

The NXT Women’s Title match was absolutely insane. Sasha Banks and Bayley tore the house down. I couldn’t believe how physical this match got. It was back and forth the whole match. There was great chemistry, a great story and it helped that the crowd was very into the match. Then the Ladder Match for the NXT Title had to follow that classic. The Ladder match had a slow start but it got intense really quick. For never being in a Ladder Match Finn Balor performed well against a Ladder Match veteran in Kevin Owens. There were some crazy moments in this match and I am sure both men will be feeling the effects for awhile.

I really hope Vince McMahon and his crew bring their A game to Summerslam because NXT set the bar to begin the weekend. NXT was on fire tonight and the crowd gave them the fuel for that fire. This is why I love wrestling and this is why I love NXT. They leave it all in the ring and they give their absolute best. There won’t be any sleep in Brooklyn tonight!