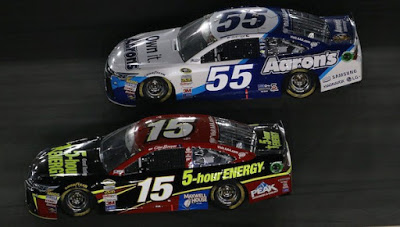 This past week Michael Waltrip Racing announced that it will no longer have a full time race team after the 2015 NASCAR season. They have stated financial hardships and lack of success as the reason for closing their doors. Robert Kauffman boiught into the team in 2007 when it was in danger of closing. They did so well at one point they had three drivers and at the time they were Clint Bowyer, Brian Vickers and Martin Truex Jr. All three drivers had very good sponsors at the time. Bowyer with Five Hour Energy, Vickers with Aaron’s and Truex Jr. with NAPA. In 2013, all of Michael Waltrip was competing and they would have been fine if it weren’t for one night and one act that changed the course of everything.
Martin Truex Jr. was on the bubble to make the Chase for the Cup going into the last race before the cut off at Richmond. It was a tight points battle to make the 12th and final spot in the chase. With not so many laps remaining in the race Clint Bowyer spun out and Brian Vickers was told to pit by his crew chief. I truly believe Truex’s team had no idea what was going on and that Vickers really had no idea what was going on either. These actions led to Michael Waltrip Racing releasing Martin Truex Jr, being fined three hundred thousand dollars and lost NAPA as a sponsor. Since these actions Michael Waltrip has not won a race and NAPA sponsors a great and an upcoming driver by the name of Chase Elliott.
There’s an old saying what comes around goes around. Also people believe in karma and I think karma caught up with Michael Waltrip Racing. I personally think NAPA was a huge reason that the team stayed afloat. They are a huge sponsor that probably put a lot on money on the line to be on the hood of what use to be Martin Truex Jr’s number 56. Cheating is never a good thing in sports and it’s pretty stupid to try and attempt to cheat in NASCAR. They go through inspections every week, their radio communications can be tapped into if need be and their are multiple angles to use in replays. I think NASCAR wanted to send a message that cheating will not be tolerated.
Michael Waltrip struggled so much in his career until the late Dale Earnhardt Sr gave him a shot and he won a handful races when he was apart of what was known as Dale Earnhardt Inc. I hate to say it but Michael’s run as an owner was much like his run as a driver and that’s mediocre. He was never the driver that his brother was and he couldn’t live up to the pressure. Michael is awesome as a analyst and makes NASCAR on FOX very enjoyable but his time being an owner and driver didn’t live up to expectations. I believe Michael Waltrip Racing would have been successful for many more years if it weren’t for those actions in 2013 that altered the Chase for the Cup. At the end of the 2015 season both David Ragan and Clint Bowyer will have to find rides and start a new chapter in their careers. As this door closes hopefully a brand new one will open for a new owner that can compete and play be the rules. Until then we will have to watch and see how the careers of Bowyer and Ragan will be effected.
Please Share This