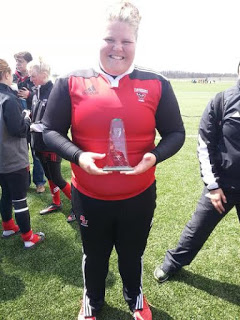 Life can throw many opportunities at you and it’s how you respond to those opportunities that make the difference. Caren Meerman has been around sports her entire life. Whether it’s a softball field, a Rugby field, a golf course or basketball court she has always had in mind to be the best. She has accomplished a lot in her athletic career and keeps continuing to reach for more. For most of her life she excelled at Golf, Basketball and Softball. At Coopersville High School she achieved a lot of success including All-Conference Golf (2009 & 2010), All-Conference Softball (2010 & 2011),  All-District Softball (2010 & 2011), All-Region Softball (2011), All-State Softball (2011), and Female Athlete of the Year (2011).  She was also teams that won conference championships as well. Those included Conference Champs in Golf 2010 and Conference Champs in Softball 2011. Caren eventually went on to Davenport University where after three years of playing softball she made a crucial change to start playing Rugby, which has proven to be successful because Davenport’s Rugby Playoff run starts very soon. Caren is always setting new goals for herself and in this interview you’ll find that she’s one of the hardest working female athletes out there. Here is what Caren had to say about her experiences competing in sports

Growing up you had three older brothers who played sports. How did that influence you and your passion for sports?
My older brothers played a key role in my passion for sport. At a young age I recall playing backyard football with my brothers, this included tackle in the snow during winter, and two hand touch in the spring, summer and fall. I remember playing basement baseball using couch cushions as the bases, we played golf in our front yard using the trees as the holes, and my brother Jake and I played railroad baseball (a game we had made up) in our backyard.

In high school you played Golf, Basketball, and Softball. What did you enjoy about playing each sport?
Golf was a more individual sport and I caught onto the sport very quickly. Golf was my relaxing sport and after all I could be playing it the rest of my life- so I tried to learn the most while playing. After starting golf my sophomore year, I ended up setting the school record my junior year scoring a 43 at our home course.

Basketball was a sport I had been playing since 5th grade and I enjoyed it mostly for the fact that people couldn’t push me around and I stood my ground. Often I would foul out of games due to strength and silly fouls committed in the post area.

Softball was and will always be my favorite sport. I have played softball competitively for over 15 years of my life and had the best time playing in high school. I enjoyed the coaching, the competition, and most of all driving in the game winning runs. Softball honored me over the years with several awards, but in all reality I was honored to play the game I had played all of my life.

After high school, you began school Davenport. What were your goals heading into Davenport in terms of athletics?My goal was to be the most competitive person on the varsity level. I came short of this goal, but I learned a lot of lessons throughout my time at Davenport.

After three years of playing softball you made the change to play Rugby. What brought on this change?
The change was made due to the constant failure of my goal. When I tried for three years to be the best at my sport, and then realized I wasn’t, reality set in and I decided to move on from the sport of softball. Also, the constant nagging from a few of the rugby players wanting me too play helped the transition a little bit.

What do you enjoy most about playing Rugby?
I enjoy the hard hits, scrummaging, breaking the gain line, getting tackled by three people at a time and most of all winning with my teammates.

Even though you are fully into Rugby do you still compete in the other sports you were in during high school?
Yes, I also play slow-pitch softball throughout the summer. I play golf and basketball a few times a year as well.

Not only do you play Rugby, but you are an Assistant Varsity Coach for the Forest Hill Northern Softball Team. How has playing helped in terms of you being a coach on a team?
This has helped because I understand both sides (coaching and playing) of the game. I learned a lot in my first year of coaching. Mostly that I can’t get out there and play the game for the athlete- which was one of my hardest challenges.

After your playing days are over do you plan to pursue any coaching opportunities?
I wouldn’t mind coaching rugby in the future. One thing I am learning currently is that I still don’t know all the rules to the game and I am constantly learning these rules on the fly. I do enjoy coaching softball however and love to be involved with my favorite sport.

You have a degree in business sports management from Davenport University. What are your goals with in attaining that degree?
My goal has been reached. I have completed that degree in April of 2014. My next goal will be to finish my Master’s Degree and find a full time job in athletics.

In today’s society, female athletes are getting more media coverage and more respect than ever. What advice would you give a young female pursuing a career in sports?
Keep pushing through and stick up for yourselves. Over the years I am starting to understand female athletes not getting the media coverage or respect is due to the profits businesses are making off of male sports. I will always understand that male sport makes more money, but I will never understand why females are pushed aside in all spectrums of sport.

When all is said and done, what will you back on say that your greatest accomplishment is?
I few highlights of my accomplishments include being All-State in high school for softball. I had also received Female Athlete of the Year for my senior athletic awards. My next accomplishment I want to finish is being a National Champion in 15’s for Women’s DII Collegiate Rugby.

Any final thoughts?
I wanted to take this time to thank Joey for being a great man, awesome teammate at UA, and a wonderful article writer. You da bomb, Joey!

I would personally thank Caren for taking the time out of her busy schedule to do an interview and talk about her experiences and goals. 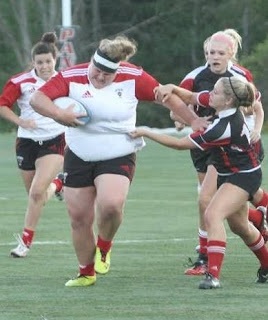