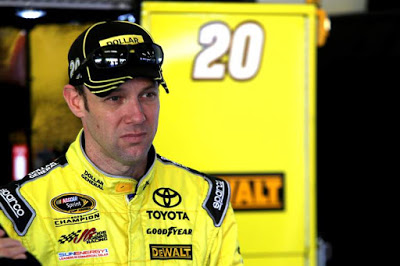 Today NASCAR reached an all time high in being hypocritical by suspending Matt Kenseth for two races and putting him on six month probation. They stated the penalties were given due to the fact that Matt Kenseth was no longer a Chase driver and he took out the leader Joey Logano who is still in this Chase for the Cup. The problem I have with this is two weeks prior to this Joey Logano already had a spot in round three of the Chase and Matt Kenseth had to win a Kansas to advance to the next round. Brian France, Chairman and CEO of NASCAR said he had no problem with what Logano did and said it typical NASCAR racing. This was the first mistake of many that NASCAR has made in the past.

In 2012, when Jeff Gordon intentionally wrecked Clint Bowyer and eliminated his chances at a championship he was fined 100,000 dollars and docked 50 points. In 2013, when Joey Logano wrecked Denny Hamlin intentionally there was no punishment. Hamlin broke his back in that wreck and missed six weeks due to Logano getting “revenge.” NASCAR wants to discuss safety. How is injuring someone not looking out for someones safety.  Joey Logano should have been forced to sit out races until Hamlin was able to return. Then in this month alone there has been hypocrisy. Look at when Kevin Harvick could only go 30 miles an hour at Talladega and took out a good portion of the field to made sure he advanced to the next round. Where was NASCAR in that situation? This past Sunday Danica Patrick did the same thing to David Gilliland and she got a slap on the wrist. Is it because she’s a woman and Gilliland is a nobody? I don’t care what the situation is or the drivers are the punishment and penalties needs to be equal across the board.

I really feel that it’s time that Brian France consider stepping down as Chairman and CEO of NASCAR. I don’t care how long his family has been running the sport. Enough is enough and it’s time for change. You don’t go out and tell the boys to “have at it” and not expect drivers to react to being robbed of a championship. You don’t support the actions of a driver wrecking another driver in which the driver that was wrecked had their championship chances crushed. You don’t suspend the driver for retaliation when you know the drivers live be a certain code. There is so much wrong with the sport of NASCAR right now and inconsistencies in penalties are a huge part of it. I hope by the time we reach the Daytona 500 in 2016 that new rules and regulations will be made and enforced equally across the board. If NASCAR continues to play favorites and then the sport will lose whatever integrity it has left. They hypocrisy is at an all time high and I hope over the next three months NASCAR looks real hard at where they are going and how they are handling things. For the time being I say good riddance and let them fight it out. On one final note this what all this feuding and wrecking reminds me of.