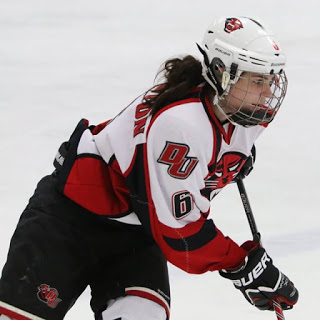 In today’s society women are getting more recognition as athletes then ever before. In the last twenty years they have created WNBA, women are bowling with the men in the PBA, the UFC’s biggest star right now is a woman and now they have a National Women’s Hockey League that started this year. Right now there are four teams and they are the Boston Pride, Buffalo Beauts, Connecticut Whale and New York Riveters. One young woman I have met has such a passion for hockey and it’s been there her whole life. She is someone I could see having a career in the NWHL in the future. Lexie Boydston currently plays for the Panthers of Davenport University. In the 2013-2014 season, she led her team in goals and power play goals. She is well on pace to match those numbers again this season. She has passion, love and dedication for hockey. Don’t believe me? Here is what Lexie had to say about her passion and her future goals.

Growing who or what influenced you to want to play hockey?
Growing up I was a little rink rat, I was always at the rink and I when I was watching my cousins play I was plastered to the glass. My dad would have to drag me out of the rink sometimes. It wasn’t until then that a good family friend threw a pair of skates at my dad and was out there with boys learning how it works. That’s when I fell in love with the game.

Who you were some of your favorite hockey players growing up?
Growing up some of the players that I idolized were Wayne Gretzky, Gordie Howe, Stan Mikta, and a lot of players from that era. Currently, Marian Hossa is my favorite player because he’s such a versatile player and that’s what I aim to be.

What were your expectations playing in high school as compared to playing in College?
High school hockey wasn’t really competitive for me; it was just something to add more hockey to my schedule since I was double rostering on a AAA travel team out of Chicago, that’s where all the expectations to be great came from and why I hold myself to such a high standard now. It certainly helped prepare me for the high expectations college. It’s like a full time job.

How did the opportunity to play hockey at Davenport University come about?
Well at first I had never heard of Davenport, I had already had everything sorted out when it came down to where I was going to play college hockey. It wasn’t until the last tournament of my senior season that my dad was approached by Davenport’s coach. He had been there looking at other players and stumbled upon me on accident. The coach was way more enthusiastic and excited to have me that my original choice that I decided to change my plans my completely and come to Davenport.

What were your goals heading into playing College?
I didn’t really have any goals heading into college and I know that may sound bad but my main thing was I wasn’t ready to hang up my skates yet and was just happy I had the opportunity to continue doing something I loved. So I guess I could say that my main goal was go somewhere where I wasn’t going to be sitting on the bench occasionally getting few shifts here and there and not getting any real playing time until my junior/senior seasons.

Do you feel you’ve met those goals so far?
So far I do believe that I have met that met goals and have accomplished much more than I ever thought I would. I was leading rookie scorer my freshman year, hold a record for goals scored at Davenport, and was nominated to participate in the World University Games in Granada, Spain last year.

You’ve also played Rugby and Lacrosse, how are they different then playing hockey?
I think the major difference is the most obvious, they weren’t on ice. I eventually got the hang of playing them but I never realized how difficult it would be changing from skating to running. It seemed more demanding because I was new to those sports and didn’t know the ropes opposed to hockey being like second nature. They were both fun to learn though.

Could you see yourself playing hockey after College on an amateur or professional level?
Up until this year there wasn’t anything substantial for women to do in hockey after college. The first paid national’s women hockey league started in October and it was very exciting to hear about because I’ve been told my whole life my dream of playing in the NHL was silly. Now all I have to say is that dream is very well alive and I’d certainly give it a go if I have the opportunity.

Hockey players, men and women alike have a certain intensity about them when they are on the ice. Is your personality on the ice different from when you’re not?
I think my personality stays pretty much the same on and off the ice. I think playing hockey my whole life has really set the tone for everything else I choose to do and I feel I have that same intensity in anything I do.

Right now society is starting take more notice in female athletes like Ronda Rousey and many others. What would your advice be to a young female wanting to play competitive sports?
My advice would be to challenge the stereotype. Find something you love and don’t do it for anything or anyone else but yourself. Play the gritty, tough, physical sport. Don’t be ashamed of doing something you love just because you’re a girl.

You are going to Davenport University for sports management. What do you plan to do with your degree?
I would love to do anything I could to get my foot in the door working for the Chicago Blackhawks. I want to stay as close to hockey as possible and what would be a better place than home?

What are your goals for the future?For starters I want to ride out the rest of my hockey as long as I can. After that, I haven’t put much thought into and I’m still working on figuring that out.

When you look back on your hockey career someday, what will you say was your great accomplishment?
I think my greatest accomplishment would be that I stuck with it. I watched so many of friends that were girls slowly lose interest in their sport of choice of choose to just quit because sports aren’t a girls thing. I’m proud that I can say that I took hockey as I could and made it.

Any final thoughts?
Thank you Joey for taking the time to interview me, it’s been a pleasure!

I would like to thank Lexie for taking the time for an interview and to discuss her passion. It’s really great to see what Davenport University is doing with all of their athletics. To check out what’s going on with Davenport Women’s Hockey go to http://www.dupanthers.com/index.aspx?path=whockey 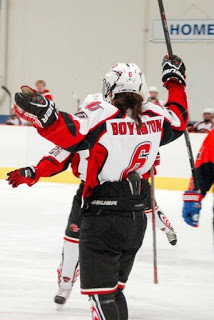 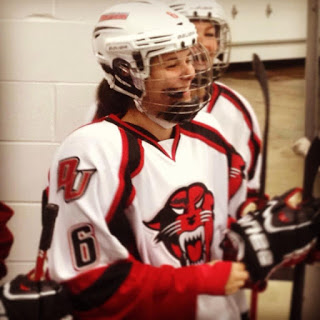