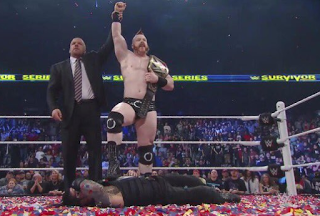 It was a really nice surprise to see Goldust return to start a feud with Stardust. It’s a feud that should have taken place during Wrestlemania season this year. Hopefully we will get to see a full feud happen now. It was really good to see two Survivor Series matches. I really think they need to re-ignite Survivor Series. They should have 3 or 4 Survivor Series matches and the winning teams of each match go on to a Battle Royal later in the night. Then the winner of that Battle Royal should receive a WWE World Title shot.

This Survivor Series was focused a lot on The Undertaker and his 25 years in the company. It was great to see him have a good match with Kane as his tag team partner going against Bray Wyatt and Luke Harper. Even though Undertaker is getting older he knows how to capture the audience. He can still tell a story and still give you chills every time he comes down to the ring. I have the gut feeling this marks the end of his illustrious career which we see come to an end at Wrestlemania 32 in Dallas.

I really did not like the fact that finals of the tournament came down to Dean Ambrose and Roman Reigns because it was way too obvious. Even the Cash In was very predictable in a lot of ways. WWE is in a tight spot right now with Rollins, Orton, Bryan, and Cesaro all out of commission. I think I would have preferred Kevin Owens winning the tournament and making some history to be one of only 3 people to hold the WWE World and Intercontinental Championships at the same time. WWE better start pushing new guys and stop shoving the same 3 or 4 guys down our throats every week. Guys like Barrett, Neville, and others need to be showcased more often. If the title were vacated 10-15 years ago we wouldn’t have this discussion because the depth was so awesome on the WWE roster.

I am not really sure where WWE goes from here. I think NXT could solve some problems but do really want see NXT stars get buried on the main roster like so many have already. I will give WWE Survivor Series a 7 out of 10 because there wasn’t any bad matches but it was far too predictable. Hopefully WWE will either sign some past superstars back or bring up new ones before 2016. If not, then it’s going to be a rough road to Wrestlemania. Next stop is TLC in three weeks and we shall see what happens for the last show in 2016.