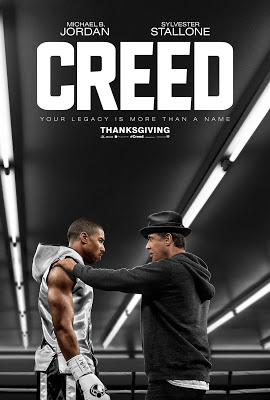 As I sat and waited in Celebration Cinema South for the movie Creed to start my head started filling in with memories of the movie series I grew up on. I started thinking about Rocky’s battles with Thunderlips, Clubber Lang, Ivan Drago, Tommy Gunn, Mason Dixon and of course Apollo Creed. I’ll never forget in 2006 when they came out with 6th Rocky movie and he fought his fight. It was the perfect way to end the Rocky saga and a way for him to go out on top. I really didn’t think there was anymore they could do with the character. However they found a way and the way was pretty awesome.
Creed as you all know is about Apollo Creed’s son, Adonis Johnson-Creed. He’s the son that Apollo never knew he had and we had a glimpse into what Apollo was like in his prime. Apollo’s widow took Adonis in despite the fact that he wasn’t her son. She felt a responsibility to her late husband. This movie had a lot of great elements to it. They had Rocky’s own battles he’s dealing with and Adonis’s battle of getting out of his dads shadow and creating a name for himself. This movie had a lot of traditional Rocky elements in it but also had some new things that Creed could call their own. I loved how they revisited Apollo’s gym, Rocky’s gym but in the end they Rocky and Adonis find their own gym to train at.

I can’t say I dislike anything about this Rocky spin-off but their are some things I wish would have been in the movie. I wish they would have had Carl Weathers in the movie showing him as an old Apollo that Adonis could envision and what life would have been like with Apollo alive. Secondly, I wish they would have re-visited the Ivan Drago character. The movie does focus a lot on how Apollo died and maybe Adonis could have met Ivan Drago to get answers. Lastly, the man who trained Apollo and eventually Rocky was Duke. Duke’s son who happens to be Duke Jr runs Apollo’s old gym. I wish they would explored the relationship with Creed and Duke a little bit more. These are all what if’s and it definitely doesn’t change my opinion of my love for the Rocky Series and the newest movie Creed.

If you have ever have been a fan on any of the Rocky movies or the entire series this is one you have to watch. It will make you laugh, cry, get excited and makes the entire series very relevant again. It answers a lot of questions to what Rocky and Apollo’s relationship was like. If you love Rocky you’ll love Creed. In the words of Rocky Balboa, “Nobody owes nobody nothing. You owe yourself.” If you’re a Rocky Balboa fan then you owe it to yourself to go see this movie!

PS. If you want to know who won the third fight between Creed and Balboa at the end of the third movie you get your answer in this movie 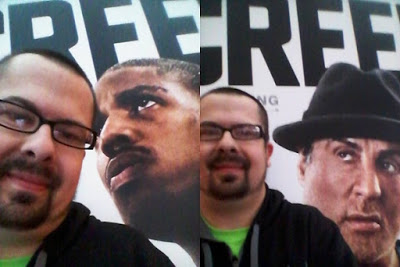