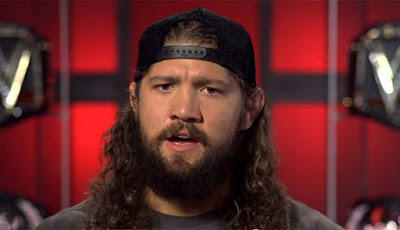 As I’ve sat these last two weeks watching WWE’s Breaking Ground on the WWE Network I realized that WWE might be more in trouble then I even want to admit. The last two episodes revealed that NXT talent Cal Bishop had been released. Cal had two previous shoulder injuries that kept him out of action for quite awhile. He was on his way to recovery and making a return when he was told he was terminated. Cal Bishop in an accomplished amateur wrestler, a hard worker and his story could have easily won over the fans. Then you have a guy like Z.Z. who has been featured on almost every episode of Breaking Ground so far.
Z.Z. was on Tough Enough and became an internet sensation due to his personality and look. However when I watch Breaking Ground I see a lazy young kid who has no passion for this business. He doesn’t put any effort in and has not heart and desire. Usually when the fans speak up about who they want to be successful they are usually right. Some example of that were CM Punk, Daniel Bryan and other stars with the similar background. So why is WWE holding on to Z.Z. when they could have had Cal Bishop? I would have understood if Cal would have gotten in the ring and couldn’t perform at a certain level but he was never given a chance to get in the ring again. Triple H is usually really great at making decisions and giving the fans what they want, but keeping a guy like Z.Z. for the fans is a huge mistake. By the time it’s over Triple H would have wasted time and money on a kid that wants to be babied and have it all handed to him.
I believe Cal Bishop’s release is no different then Devin Taylor being released. Devin was slowed by injuries and was having a hard time picking up on things because of it. I truly believe she should have been kept around to continue her role as a backstage interviewer. She had a great personality, and did her job well. After all they kept Corey Graves after injuries ended his career and he’s become a great announcer. Devin Taylor should have been given the same opportunity.
Triple H runs NXT  a lot different then Vince runs Raw and Smackdown but he’s going to make mistakes just like Vince does. I believe letting Cal Bishop and Devin Taylor go was a mistake. Instead we are stuck with Z.Z. and in the end it’s going to be an epic fail. I am sure now that the fans have seen how lazy Z.Z. is they could really care less about him. There is nothing special there and he just doesn’t have what it takes to be a WWE Superstar. I wish Cal Bishop all the success in the world. Rumor has it that he will be trying out for the USA Olympic Team for the 2016 games. I hope he makes the team and does well where ever he goes. Maybe this will open the eyes of WWE and some of the decisions they are making.
WWE has a big problem right now and it’s the fact they focus on the wrong people. Start focusing on the people who have the passion, the work ethic and those who shine in the ring. I for one would rather see a great wrestler with no personality then a horrible wrestler with tons of personality. I want to be awed by what happens in the ring, not outside of it. WWE needs to re evaluate some of their prospects and start making better decisions about the future of their company. How many more will be like Cal Bishop being passed by for someone like Z.Z.? Hopefully for the future of the business they won’t drop the ball like this again.
Please Share This