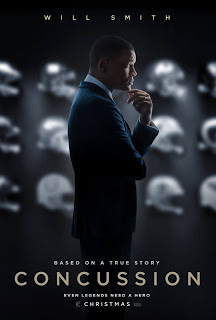 I once stated that former NFL players have no business suing the league because they knew the risks of getting into their sport and made it a career for themselves. To those players and their families I’d like to apologize for making that statement several years ago. Before I saw this move people called this propaganda, overblown Hollywood Drama and the movie the NFL didn’t want you to see. While all movies are Hollywood Drama in some sort of fashion, the reality of the story cannot be denied. Many people to this day continue to deny Dr. Omalu’s working and findings. Whether you choose to believe what this movie represents is up to you, but from what I have observed the events in this movie don’t seem very far fetched.

I believe the NFL knew about the effects of concussions before Dr. Omalu’s findings but when they knew about them will always remain a question. It will always remain a question due to a lawsuit in which the NFL put in the condition that they didn’t have to disclose when they knew about the effects of concussions. I also believe that the NFL would do anything to protect the multi-billion dollar business from being under scrutiny. Here are some of the quotes in the movie that suggest that they would do anything. to protect their business.

“Tape, needles, Torodol, Vicodin, whatever it takes to keep them in the game. It’s business.” -Dr. Julian Bailes

“They’re terrified of you. Bennet Omalu is going to war with a corporation that has 20 million people on a weekly basis craving their product the same way they crave food. The NFL owns a day of the week, the same day the Church used to own. Now it’s theirs. They’re very big.” -Dr. Cyril Wecht

“They don’t want to want to talk to you. The NFL has known about the concussion issue for years. You’ve turned on the lights and gave their biggest boogey man a name.” -Dr. Julian Bailes

Whether these things were actually said is something that only Wecht and Bailes know. Both Bailes and Omalu say that film is accurate while others deny that CTE was discovered long before Omalu did the autopsy. If CTE was known before Mike Webster’s death then why wasn’t anyone questioning it? It was either because it didn’t existed or someone wasn’t brave enough to speak up. The fight that Omalu and those close to him had to deal with seemed very real. They dealt with a lot of hardships and backlash because he was brave enough to speak up.

There are stories that Concussion might have been edited significantly due to the NFL’s lawyers getting involved. If this is true then it proves that the NFL is still in denial about their character and they it’s portrayed as a business. I have to laugh because before the began, they had an NFL Pepsi commercial touting Pepsi as the official soft drink of the NFL. Is it because Celebration Cinema has Pepsi as a vendor or is it because the NFL will go beyond great lengths to protect their image? I’ll let you be the judge of that.

In the end, the NFL has changed and the way the game is played is very different now then what it was. There are now penalties and punishment for helmet-to-helmet hits and targeting. Players who get a concussion now have to meet and pass a concussion protocol before they are allowed to play again. This NFL scenario also reminds me of what happen to former WWE Star Chris Benoit. In 2007, Benoit killed his wife and son and then committed suicide. The WWE much like the NFL underwent a lot of scrutiny and was forced to chain. The WWE no longer allows major blows to the head with chairs and other foreign objects. They also have a medical team that has a concussion protocol as well as other tests for other injuries. If a superstar doesn’t pass then they don’t get into the ring.

The NFL is a business, but it takes people to run that business. I don’t think Omula was trying to shut down pro football. I think he was trying ensure that those who play in the NFL had a healthy future for themselves on their families. Unfortunately the families of Mike Webster, Terry Long, Justin Strzelczyk, Andre Waters, Dave Duerson, and Junior Seau didn’t get a husband, a father and friend didn’t get that healthy future. Their stories are just as powerful as Omalu’s passion to save others lives. This movie was enlightening, heart wrenching and very powerful. Whether all of it’s true is for viewers to decided. Only the people who were portrayed in the movie know what the truth really Will Smith, Alec Baldwin, and Albert Brooks do an awesome job in their roles. Everyone does a a really good job in their roles. It’s no wonder why this movie is up for so many awards. I would give this movie 5 stars, 2 thumbs up and would recommend it to any sports fans out there.