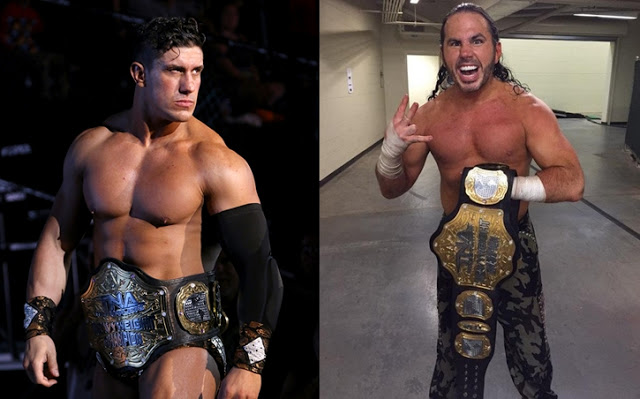 Last night on TNA Impact Wrestling on POP TV, Matt Hardy once again became TNA World Heavyweight Champion. As I sat there watching this unfold I began to tell myself that I really wasted much needed brain cells on something that could have happened three months ago. Back at Bound for Glory in October Matt Hardy defeated EC3 and Drew Galloway to become the TNA World Heavyweight Champion. The story then called for EC3 to file an injunction because Jeff Hardy was the referee of the match and helped Matt win the title. This resulted in Matt Hardy vacating the title and the company not having a champion.

From October 7th to January 5th TNA had the World Title Series. The sad thing is TNA had Bound for Glory was on October 4th but the TNA World Title Series was actually taped July 22nd through 25th and the time frame couldn’t be any worse. So they go through all these matches and the finals ended up being EC3 and Matt Hardy. The finals took place on January 5th and to no one’s surprise EC3 recaptured the TNA World Title. Out of all the possible outcomes with 32 competitors that is the best they could come up with?

Let’s fast forward to last night. They did a double switch in where Tyrus turned on EC3 and helped Matt Hardy become the new champion. So now we have Hardy as a heel and EC3 as a face. This all could have been accomplished back in October. Prior to Bound for Glory, Matt Hardy had lost to EC3 in multiple title matches. If I were booking TNA Impact Wrestling I would have done this much differently instead of putting viewers through three months of garbage. I would have had Matt Hardy win the title at Bound for Glory. After the match I would have had Tyrus take out Jeff Hardy and then Matt should have proceeded to help Tyrus. Once the beat down on Jeff was finished then they could have focused on EC3 to make the double switch even more evident. Following Bound for Glory EC3 could have chased after Hardy over the next few months leading to a huge match on the premier episode on Impact on POP.

This is one of the main reasons I can’t take TNA Wrestling seriously and don’t think they will ever be legitmate competition for anyone. I will put Lucha Underground and Ring of Honor ahead of TNA Wrestling at this point. The problem with all three companies is they have the worst taping schedules that you could have. TNA and Lucha taped any where from two to three months in advanced and ROH is usually taped every four weeks. I remember when TNA use to be something and it was actually a great alternative to WWE. Now it’s become like what WCW was a year before it shut down. All I can say at this point is congratulations to Matt Hardy. I hope he has a successful title run and get some momentum going for TNA Wrestling.