Sometimes when movie critics critique a movie I wonder how much time they spend actually focusing on the subject of the movie and how it compares to other movies in that subject. This movie cover to topics I am very passionate about and those are the Christian Faith and Professional Wrestling. The movie was based on the true events of Chris Whaley’s life. He was a professional wrestler turned Southern Baptist Preacher. Although the setting was more of a modern day setting instead of the 80’s the story was a great feel good story. I’ll be the first to admit that this was not a star studded cast but it didn’t need to be.
As a Christian, the movie shows how the power of faith can bring so many great things, Be faithful to the Lord, reach out to your community and change lives are things I got out of this movie. One persons passion can be the saving grace for many. This movie had the same feel as Facing the Giants did for me. It was uplifting, it was heartfelt and family friendly. I don’t think family friendly movies get the credit they deserve and this one deserves more credit then given.
From the pro wrestling side of this movie I felt like my intelligence was not insulted like it was in Ready to Rumble. There a face, a heel, and a shrewd promoter. It actually reminded of how Vince McMahon makes or breaks stars. It also shows the promoters do have a heart when it really comes down to it. When I knew this was the final movie “Rowdy” Roddy Piper was going to be in it drew me in even more. Piper played the evil promoter and he played it well. His greatest moments as a pro wrestler were as a heel so he played the role well.
I noticed at the end of the movie in the final scene that Piper didn’t look like he was acting. It seemed like he was himself showing genuine Piper emotion. It almost seemed like he knew this was the final movie he was going to be in. I would recommend this movie to anyone who needs to be uplifted. It doesn’t matter if you’re a Christian or a pro wrestling fan. It’s simply a feel good movie that will give you hope that anything is possible with a little bit of faith and trusting in the Lord. If you’re a pro wrestling fan then I would tell you go out an honor the memory and legacy of “Rowdy” Roddy Piper. If you don’t believe me go to http://themaskedsaint.com/ and listen to what Shawn Michaels, Mick Foley and Jeff Jarrett have to say about this wonderful Independent Christian Film. Go check out The Masked Saint today. 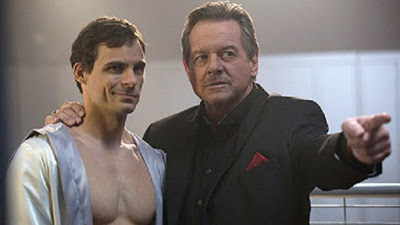