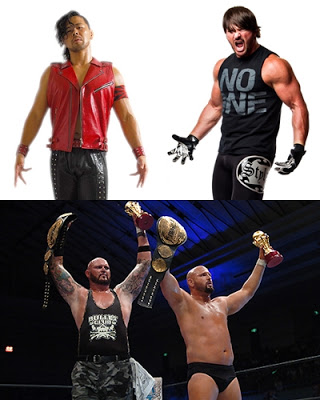 Rumors are running rampant that Shinsuke Nakamura, Doc Gallows, Karl Anderson AJ Styles aall gave their notice to New Japan Pro Wrestling and are headed to WWE. If this is true the whole landscape of WWE is going to chance especially if they head to NXT. Triple H is using the same vision that Vince did in the 80’s. Get all the best talent and bring them all together to your company. I I believe all four of these men can make a huge impact in the NXT atmosphere. Nakamura and Karl Anderson have found great success in Japan and are known by the American fans based on their special appearances in Ring of Honor. AJ Styles had a lot of great year between Ring of Honor and TNA Impact Wrestling. Now that Sting has wrestled in the WWE, many regard Styles as the greatest in ring performer to never compete in WWE ring at a high level. Doc Gallows was once in WWE as Festus and went by the name Luke Gallows. He was a member of the Straight Edge Society with CM Punk, and Joey Mercury. All four of them have a lot to give and could make NXT more money then Raw or Smackdown.
If I were writing a first run for the Bullet Club in WWE, I would have all of them come in together and back AJ Styles. AJ Styles feuds with Finn Balor over the NXT Title but in the process Gallows and Anderson align themselves with Balor reunited to origins of where the Bullet Club started. I also think revisiting Styles and Samoa Joe on a grander scale would do big dollars for WWE. These two men have had so much history together it’s unbelievable. As far as Anderson and Gallows being a tag team in NXT would elevate the tag team division as a whole. There is already a great tag team division down there but they would bring a different element that we haven’t seen yet. I think Shinsuke Nakamura could have a great match with anyone. If he comes in I would to see him compete with guys Samoa Joe, Sami Zayn, Apollo Crews, and Hideo Itami. There are so many possibilities if these four arrive in WWE or NXT together.
If the rumors are true big things are on the horizon for NXT. Even though Triple H won’t openly admit it I truly believe he is trying to outdo Vince in every possible way. He’s using Vince’s own tactics from 20 to 30 years ago but he’s doing to give the fans what they want. What they want is a brand that focuses on great wrestling without all the ridiculous stories. Believe me these four man are anything but ridiculous. I have a feeling that “The March to Wrestlemania” is going to be phenomenal. Stay tuned for more on this developing story that is taking the pro wrestling world by storm.
Please Share This