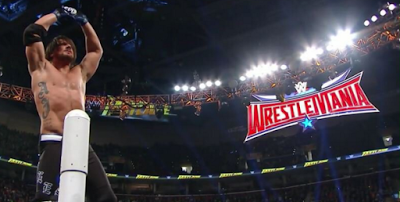 Tonight was a huge fork in the road on the way to Dallas, Texas for Wrestlemania 32. A lot of things became more clearer on what Wrestlemania will look like. Before I begin with my thoughts here are the results of Fastlane:

It was a solid show and the matches were solid as well. I think the show set up some obvious matches for Wrestlemania. My favorite matches of the night were the United States Championship Match, Intercontinental Championship Match, and AJ Styles vs. Chris Jericho. I am really disappointed there wasn’t more surprises considering this is the last big show before Wrestlemania. I feel they missed an opportunity on the Cutting Edge Peep Show to introduce a new tag team while The New Day. They could have introduced Enzo and Cass, The Vaudevillians or another NXT tag team. They need some surprises going into Wrestlemania. I thought we’d have a lot more answers of what Wrestlemania would look like but not many were answered.

One question that was answered is who would be facing Triple H at Wrestlemania The Main Event was everything I thought it was going to be. It was brutal, hard hitting and had three legitimate lunatics in their own right. The physicality of this match was off the charts. All three competitors brought out everything they had. At the end of the night we now know the Wrestlemania 32 Main Event will be Triple H vs, Roman Reigns for the WWE World Heavyweight Championship. As for Dean Ambrose and Brock Lesnar, their roads remain unclear.

I really hope that the next six weeks worth of television has some surprises and epic moments because tonight did not. The matches were good is a pay-per-view if the matches are the only thing going on then the fans will lose interest really quick. If I have to give this show a rating I would give it 6 out of 10. because the matches weren’t bad but the buildup for Wrestlemania was just flat out horrible. Hopefully this does not carry over into Wrestlemania. WWE has a chance to redeem themselves on March 12 when they have The March to Wrestlemania on the WWE Network. This will be the one last big opportunity to get some momentum. Until then lets get out of the Fastlane in Cleveland and brace yourselves for the road to Dallas.