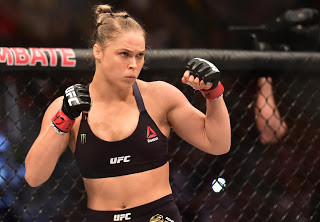 Before I begin, I want to make it very clear that I take the issues of depression, post traumatic stress, and suicide very seriously. I have seen so many cases of it in my life and have had several people I know effected by it. I am in no way, shape or form trying to make light of these issues. These issues are very serious and they should be handled with a great deal of sensitivity.
When I watched Ronda Rousey’s interview on Ellen Degeneres she spoke very passionately about her career and her life. Ellen brought up her loss to Holly Holm and Ronda began to get emotional and said she thought no one cared about her now that she lost and that she was nothing without her UFC title. She thought if she wasn’t here that no one would miss her. I just find it hard that this strong, independent, outspoken, and powerful woman would let one loss bring her down to that degree. I have known people that have been depressed and suicidal and you just don’t have those thoughts for one minute and then they are gone. I know some people that it takes a long time and a lot of help to get over thoughts like these. After her brief moment of crying she then got back into Ronda mode and pretty much said she didn’t care about who Holm fought and then she wanted to be the one to defeat Holm. This did not sound like a woman that was suicidal or depressed. I have no doubt she was depressed for awhile after her devastating to Holm but if she was as bad off as most people are with depression then she would have sought professional help and we would have heard about it.
I’ve said many times that the UFC uses WWE’s formula to make a great fight out of a great story. Would it surprise me if the UFC told Ronda Rousey to say some of these things in her interviews? Absolutely not. Ronda went from being a great upstart, to a respected fighter and eventually someone a lot of people didn’t like because of her attitude and how she carried herself. It would not surprise me if the UFC is trying to gain sympathy for her and set up for a great comeback fight against Holm that would make a lot of money. I am just having a hard time buying her comments because there have been great athletes who have lost in a major way before and they have never made these kind of comments. Then again there is a first for everything.
If Rousey’s emotions and comments were absolutely 100 percent real then I will be the first to apologize. I do think she’s a positive role-model for young woman and an inspiration for female athletes all over the world. She was a good champion, she’s been in movies and she’s all over the media. I hope she comes back better then ever and continues to be a pioneer for female athletes. I never want to say that someones feelings and emotions are fake and a lie but the UFC is considered sports entertainment and their fighters are becoming more like characters now. How do you seperate the fighters personality from the real life personality? I do feel they are two totally different things. However as I said before if I am wrong about this then I would be the first to apologize for thinking differently. You be the judge. Watch the Ellen interview and see for yourself.
On a final note, if you are dealing with depression, post traumatic stress, or suicidal thoughts please call the National Suicide Prevention Lifeline at  1 (800) 273-8255 or visit the website www.suicidepreventionlifeline.org