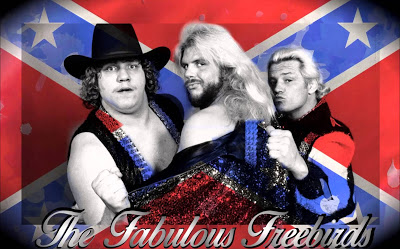 In the heart of the 80’s no one in the sports word, celebrity world or the squared circle embodied, embraced and donned the Stars and Bars more then The Fabulous Freebirds. They formed in 1979 and ran all the way until 1994. When I think of the Freebirds as a whole I think of their fierce rivalry with Von Erich’s in World Class Championship Wrestling.  They fought so hard against each other it really made you get on the side of the Von Erich Family and absolutely hate the Freebirds. They also had feuds with The Road Warriors, The Midnight Express, The Rock N Roll Express The Fantastics, and Devastation Inc. All of the Freebirds were talented and it was that talent that brought them 27 championships in singles and as a tag team between the different variations of the faction.
When I think of the long term legacy of the Freebirds I think of Michael Hayes who should be credit so much for the success of the group and the different ideas he’s brought to the pro wrestling business. During his time in the WWE he was known as Dok Hendrix, managed the Hardy Boyz  in their humble beginnings and eventually become an agent for the company. The Freebirds are definitely deserving of this honor and it has been a long time coming. Sadly, Hayes and Garvin are the only two remaining Freedbirds left. Terry Gordy passed away in 2001 and Buddy Roberts passed away in 2012.
I think it’s fitting that The Freebirds are being inducted into the WWE Hall of Fame in Dallas, Texas. They built their legacy in Texas. Say what you will about Southern Pride, Confederate Flag, and everything that goes a long with it. They brought in a whole new set of fans because of their personalities. They should be remembered as pioneers and innovators. Congratulations to Terry Gordy, Buddy Roberts, Jimmy Garvin and Michael Hayes on being inducted into the WWE Hall of Fame Class of 2016.