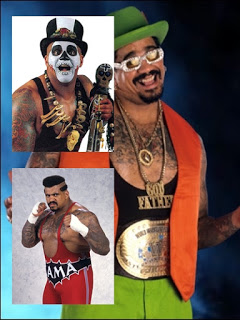 When I was a small child there wasn’t many wrestling characters that scared me but the ones that did were The Undertaker and Papa Shango. Papa Shango arrived in WWE in 1992 and instantly feueded with the Ultimate Warrior and The Undertaker and practiced his voodoo magic by cursing his opponents in the ring. Unfortunately the gimmick was considered a joke and not taken seriously enough to have a good run with it so in 1993 Charles Wright left the WWE and wrestled down in USWA.
In 1994, Wright returned to WWE under the name Kama and was a shoot fighter. His run as “The Supreme Fighting Machine” was quiet and unforgettable even if he did have some run-ins with The Undertaker. It was in 1997 when Wright got his break and became apart of the Nation of Domination as Kama Mustafa. From 1997 to 1999, he transitioned from being Kama Mustafa into The Godfather. He became one of the most beloved characters in the Attitude Era. He would be accompanied to the by his ladies and even sometimes use his ladies to get out of matches. He became WWE Intercontinental Champion and when he became The Goodfather as part of Right to Censor he won the Tag Team Championship. The Godfather wrestled full time until 2002 when he retired and went back to Las Vegas to run a Gentlemen’s Club
He’s often made appearances in the WWE since his retirement and every time he gets a great reaction from the crowd. His character is one of many reasons the Attitude Era was so much fun to watch. Congratulations to Charles Wright aka The Godfather, Papa Shango, Kama for being the newest member of the 2016 WWE Hall of Fame.