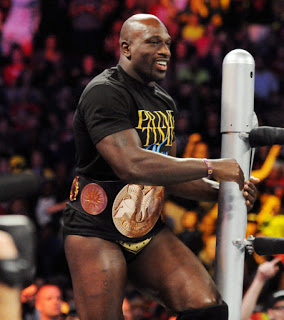 On the February 8 edition of Monday Night Raw where Daniel Bryan retired a very minor incident occurred after Daniel Bryan went to the back. Vince McMahon was walking to the back and Titus O’Neil joking grabbed Vince trying to play with him a little bit. At the time of the event I didn’t think to much of it. It was reported by multiple sources that Titus O’Neil was notified at Tuesday Night’s Smackdown tapings that he was suspend 90 days for the minor incident. I am not carry on and act like Titus is my favorite wrestling but I do respect what he does and how hard he works. I am just appalled and shocked that he was suspended for 90 days.
I have always respected Vince McMahon for how great WWE use to be. It seems over the last few years he’s lost touch and isn’t the genius he once was. Suspending Titus proves one of two things to me. The first being that Vince doesn’t treat all of his employees equally or he really is racist like so many people have thought he is all of these years. If this would have been one of his puppets John Cena or Roman Reigns the wrestling world wouldn’t even be discussing this. The WWE has been accused of racism before and it was actually proven awhile ago when Alberto Del Rio left the company due a WWE employee made racial remarks to him. Del Rio would eventually come back and be treated fairly.
For me this is the last straw. Vince McMahon no longer knows what talent is and no longer knows how to manage it. I think deep down inside he’s bitter and angry that his son in law has a better product then he does. Why do you think Vince undermines everyone that comes up from NXT? He knows if they are successful that Triple H will get all the credit, not him. Triple H knows talent, knows how to manage talent and gives everyone an equal chance to succeed. I just think it’s so hypocritical by WWE to treat Titus this way because all they ever do is promote how great of a role model, father and community leader he is. I hope the WWE Board of Directors reverses the decision otherwise they are going to make themselves look really stupid with this decision.
There is already a lot of backlash from past stars, and fans alike. I am sure the current roster isn’t happy but they are afraid to speak out about it and they are probably even more afraid to interact with Vince more now then ever. I almost feel like there is more to the story that we ate not getting. I really feel an explanation is owed to all. I don’t think Vince McMahon rationally thought about this decision because there are huge losses for Titus because of it. Titus will now miss a Wrestlemania payday and be out a lot of money due to missing that pay day. Vince McMahon also must be having memory loss at his old age. Does he not realize that it’s Black History Month and he just crapped all over one of the more popular African American stars that he has in the company? I really want to hear the whole story and the whole explanation. As fans who invest our time and money into the WWE product we deserve to know why this led to a suspension that wasn’t necessary. Only time will tell if the real story comes out.