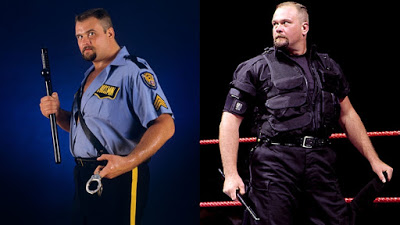 When I think of all the cool characters I grew up watching one of them that stood out was the Big Boss Man. His real life job as a prison guard in Cobb County Georgia and it’s that job that led him to fame and notoriety in WWE. Before he became the Big Boss Man in WWE he was known as Big Bubba Rogers in Jim Crockett Promotions and Universal Wrestling Federation. In 1988, Ray Traylor received a big break and his career would change forever.
He came in to the WWE as the Big Boss Man and worked primarily as a heel. He was managed by “The Doctor of Style” Slick and even teamed with Akeem(One Man Gang). The feuded with The Rockers, Demolition and played a key role in the break up The Mega Powers(Hogan and Savage). In 1990, Boss Man became a good guy after Ted Dibiase tried buying his services. Once he became a good guy he feuded with the Heenan Family for close to a year. He had a memorable match with Mr. Perfect at Wrestlemania 7 but a few months is the match I will always remember him most for. In the Summer of 1991 he feuded with The Mountie which led to a Jailhouse Match at Summerslam 1991 where the loser had to spend the night in jail. The Big Boss Man proved that American justice would always prevail. The next couple of years were quiet for Ray Traylor as WWE would transition for a newer generation of guys. He had a brief stint in Japan working with the likes of Stan Hansen, and “Dr. Death” Steve Williams. That would not be the last of Traylor in the ranks professional wrestling
In December 1993, he arrived in WCW and quickly feuded with Rick Rude and Vader. He underwent so many name changes.He was “The Boss,” “The Guardian Angel,” “Big Bubba Rogers,” and then eventually went by his real name. During his time in WCW he was apart of The Dungeon of Doom and the n.W.o. Once kicked out of the n.W.o. he feuded with them and defeated notable members like Scott Hall and Curt Hennig. He left WCW in March 1998 but his career would not be over just yet.
In late 1998, he returned to the WWE as part of “The Corporation.” He was Mr. McMahon’s bodyguard during the time when McMahon was feuding with “Stone Cold” Steve Austin. Boss Man had rivalries with such guys like Al Snow, The Undertaker and The Big Show. When I think of Boss Man’s last WWE run the first thing that will always come to my mind is his antics towards The Big Show and the storyline they had together. It was inappropriate and disgusting but at the same time very over the top and funny. It showed that Boss Man had a range of what he could do as a performer. During his time in the professional wrestling world he won the UWF Heavyweight Championship, WWE Tag Team Championship and captured the WWE Hardcore Championship four times. His career spanned almost 20 years and he was one of the quickest and most agile big men during his time in the ring.
Sadly, Ray Traylor passed away on September 22nd, 2002 at the very young age of 41. He left behind his wife Angela and two daughters. Even though the Big Boss Man is no longer with us, he is very deserving of the WWE Hall of Fame. He was an outstanding in ring competitor who paved the way for a lot of guys who didn’t have the physique of a bodybuilder. Congratulations to the Traylor Family on receiving this honor for the Big Boss Man. Now there is officially law and order in the WWE Hall of Fame.