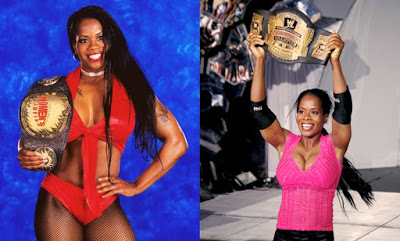 When I think of Miss Jackie and almost 20 year career I think of a woman who was tough, gifted in the ring and never backed down from anyone whether it be male or female. My first real memories of Jacqueline is during the infamous feud between Chris Benoit and Kevin Sullivan. Kevin’s ex-wife Nancy (known as Woman) was in a relationship with Benoit and accompanied him to the ring. This led to Sullivan acquiring the help of Jackie. Her time in WCW was brief but she also feuded the Disco Inferno and at one point managed the Harlem Heat.

It was in WWE where people took notice. She was involved in a storyline with Marc Mero and Sable. Mero and Sable were married in real life but they had issues on screen because of Mero’s jealousy. Jackie came into aid Marc Mero to try and rid the WWE of Sable. After 6 months with Mero they eventually split and she became apart of Pretty Mean Sisters with Terri Runnels. In 2004, she made history by becoming only the third woman to win the Cruiserweight Championship.  The other two women were Daffney and Madusa in WCW. One of the other things that stand out is that Jackie was a trainer of the first Tough Enough. Her career in WWE had a lot of great highlights and she helped paved the way for future women that would come after her.

After her tenure in WWE, Jacqueline went to TNA Impact Wrestling. She spent her time there doing everything from wrestling, refereeing and managing. She managed James Storm and feuded with Gail Kim. Her time in TNA Impact Wrestling was memorable and she really helped the women of the Knockout’s Division. Before her time in WCW, WWE, and TNA she was a UWF Women’s Champions and a 14 time USWA Women’s Champion. She has experience in kickboxing, boxing and a third degree black belt in taekwondo.