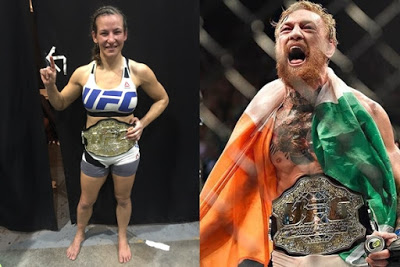 At UFC 196, the Mixed Martial Arts world was turned upside down with two big fights and two outcomes that I didn’t think were going to happen. In the Women’s Bantamweight Title Fight Miesha Tate submitted Holly Holm in the 5th round to be the new Women’s Bantamweight Champion. Dana White didn’t hesitate to let the world know that Tate’s first opponent as champion would be Ronda Rousey. Rousey has already beat Tate on two separate occasions and if she wants her belt back she will have to make a third. A lot of fans and critics are now saying that Tate is the rightful champion and she’s the best female fighter in the UFC. I hate to burst that bubble but I feel wholeheartedly that Rousey is still the best and will remain the best for a few more years. I will Holly Holm credit for beating Ronda but at the end of the day I still believe the only thing that beat Ronda was Ronda. She was getting to confident, cocky and adding too much to her schedule. Her belief that she was untouchable came back to haunt her in the end. As it relates to Holm versus Tate, I don’t know how anyone could consider it upset that Tate won. She has way more experience in the MMA world the Holm did. I stated before this fight happened that if Tate got Holm on the ground then the fight was over. A boxer can out box any striker but if a boxer cannot out maneuver a specialist in Brazilian Jiu Jitsu unless you have the proper training. Holm is a one dimensional fighter from what I can see and she’s going to have to develop a ground game if she ever wants to get that belt back.
As for the main event, I did not see Nate Diaz winning that fight on 10 days notice however I was wrong. Apparently he was training for a triathlon in between fights so he was already in shape. McGregor decided to get gutsy and move up weight classes. Originally he was suppose to fight Rafael Dos Anjos for the  Lightweight Championship. Instead he and Diaz agreed to fight at Welterweight and it didn’t disappoint. They both came in with a lot of intensity and trash talk only on 10 days notice. I did not see a Diaz win by submission coming. It was really shocking to me that he could pull that off with so time to train for the fight. I truly believe McGregor needs to stay at Featherweight and either fight Aldo or Edgar next. As for Diaz, he deserves a title shot in the lightweight division. Dana White might not like the Diaz brothers but he needs to face facts. These two are two of the most intense individuals in MMA history. There isn’t to many people who could go toe to toe with McGregor and not let the mind games get to them. With all the continuous animosity between Nate Diaz and Dana White I’ll be curious to see what happens from this point on. One thing for sure is that Nate Diaz earned every bit of the victory last night,
While we wait for Rousey-Tate 3, the futures of McGregor and Diaz here are some upcoming fights that could also shake things up in the UFC:
UFC Fight Night 85
Frank Mir vs. Mark Hunt
UFC Fight Night 86
Ben Rothwell vs. Junior Dos Santos
UFC on Fox 19
Rashad Evans vs. Mauricio Rua
Lyoto Machida vs. Dan Henderson
UFC 197
Daniel Cormier  vs. Jon Jones
Demetrious Johnson vs. Henry Cejudo
Anthony Pettis vs. Edson Barboza
UFC Fight Night 87
Alistair Overeem vs. Andrei Arlovski
Antônio Silva vs. Stefan Struve
UFC 198
Fabrício Werdum vs. Stipe Miocic
UFC 199
Luke Rockhold vs. Chris Weidman
Dominick Cruz vs. Urijah Faber
There a lot of veteran fighters who could shake things up. I know from watching some of these guys they aren’t ready to give up a shot at potentially being champion again. If any of the fights are like what we saw at UFC 196 then this spring heading into the summer is going to be a lot of fun to watch. Keep checking back for more on any late breaking UFC news.
Please Share This