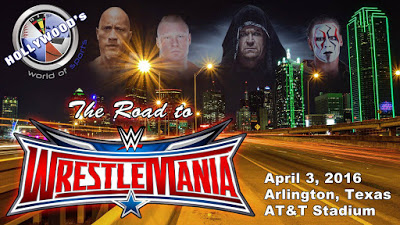 This week’s Road to Wrestlemania had some twists and turns that are really setting the tone for Wrestlemania 32. The first thing that comes to mind is Neville ended up getting injured on Raw and is now out for Wrestlemania. He’s just another name in the long list of injuries in WWE. He was rumored to be involved in a multi-man Intercontinental Title Match with Kevin Owens and Kevin Owens. The other big thing this week is Shane McMahon and The Undertaker came face to face which resulted in Shane getting choke-slammed to end Raw. The Wrestlemania card is now officially in place and with two weeks left there might be one or two more matches added to the biggest show of the year. Before I talk about the Wrestlemania card here is how things went down in WWE this week:

Monday Night Raw
The New Day defeated Alberto Del Rio/Rusev
Ryback defeated Sin Cara
Sami Zayn defeated The Miz
Naomi/Tamina defeated Alica Fox/Brie Bella
The Uso’s defeated Bo Dallas/Adam Rose
Triple H defeated Dolph Ziggler
Neville defeated Chris Jericho
WWE NXT
The Hype Bros defeated Angelo Dawkins/Kenneth Crawford
Emma defeated Deonna Purrazzo
Tommaso Ciampa defeated Jesse Sorenson
Bayley/Asuka defeated Eva Marie/Nia Jax
American Alpha defeated The Vaudevillians
Thursday Night Smackdown
Dolph Ziggler defeated The Miz
Bubba Ray Dudley defeated Goldust
Kofi Kingston defeated Wade Barrett
Kevin Owens defeated AJ Styles
I must say that the Owens-Styles match on Smackdown was very fun to watch. I think if given 30 minutes or more they would tear the house down. Even if Styles is not involved with Intercontinental Title match I see him and Owens feuding post Wrestlemania. Speaking of the Intercontinental Title, it has been rumored that Dolph Ziggler would be involved with Kevin Owens and the Intercontinental title match, Ziggler competed on Raw against Triple H in what I would consider a match of the year candidate. A lot of people are complaining that Triple H officially “buried” Ziggler once and for all. I have to ask, are you kidding me? This very well could have been the last match Triple H ever wrestles on Monday Night Raw. He gave Ziggler atleast a good 20 minutes and made Ziggler look great. For someone who buries talent he sure took one of heck of a beating from Roman Reigns. I’ve come to the conclusion that you’re not going to make all the wrestling fans happy. With that being said here is the current Wrestlemania Card:
Wrestlemania is just two short weeks away and I am sure the next two weeks of television should be intriguing and intense. Check back next week for more on the Road to Wrestlemania as well as my NXT Takeover Preview and Predictions.
Please Share This