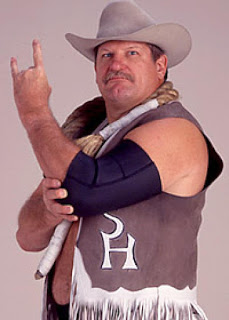 When you think of tough men from Texas you always think of the Rhodes and the Funks. Most men from Texas don’t make a living being successful in Japan. For the majority of his 28 year career Stan “the Lariat” Hansen wrestled in Japan. He was trained by the Funk family which explains the craziness and the toughness of this man. His cowboy hat, tobacco chewing and bull-rope carrying ways was enough to intimidate any opponent. Early on his career he had runs in WWE and AWA. He won the AWA World Heavyweight Championship but then decided not defend it. His actions of running over the AWA Championship with his truck and sending it back to Verne Gagne is one of the things that made him legendary. He also spent some time in WCW feuding with Lex Luger, Terry Gordy and Steve Williams.
His legend grew even further when he and Vader fought in 1990. All Japan and New Japan had a dream card show where Vader and Hansen had a brutal match which resulted in Vader’s eye being heavily damaged by Hansen’s use of his thumb. He never worked for New Japan again. He spent his time in All Japan teaming with Bruiser Brody, Terry Gordy,Ted DiBiase, Genichiro Tenryu, Dan Spivey, and Bobby Duncum, Jr. He also feuded with some of his partners from time to time because he was that crazy. Hansen also body-slammed Andre the Giant, feuded with Giant Baba and headlined in Japan with Hulk Hogan. In my opinion, he was the first American to be successful in the Japanese Wrestling Culture.
When I think about the impact that Stan Hansen, I think to myself that if it weren’t for him there would be no such thing as the Bullet Club. Hansen paved the way for wrestlers in North America and Europe to be successful. He paved the way for guys like Finn Balor, AJ Styles, Karl Anderson, and Matt Bloom. He has also influenced guys like John Bradshaw Layfield, and Luke Harper. In his career we won 39 championships with the majority coming in Japan. He is very well deserving of this honor and his legacy of what he did in Japan will be forever remembered. Congratulations to Stan Hansen on becoming a member of the 2016 WWE Hall of Fame. 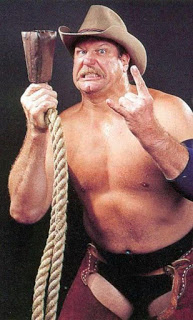