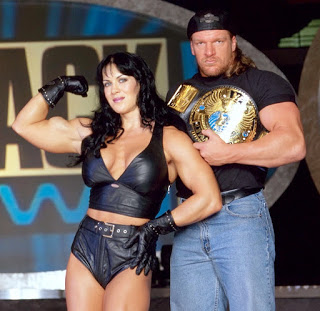 In 1997, the world was introduced to Chyna. She was the woman accompanying Triple H to the ring on his rise to the top. Most people know Triple H’s story of being sent to the bottom after the 1996 Madison Square Garden “Curtain Call.” In 1997, Triple H won the King of the Ring and had one of the most underrated feuds during that time with Mick Foley. Chyna proved in this feud she didn’t care how scary, big or intimidating the opponent she would interject herself if necessary. She was by Triple H’s side when he won the Intercontinental Championship in 1998 and his first WWE Championship in 1999. Chyna was no stranger to the championships. She was the Women’s Champion, the first female Intercontinental Champion and first female entrance into the Royal Rumble. She had many highlights and history making moments on the camera but behind the scenes was a different story.

Chyna was let go from WWE in 2001 with the major reasoning being the personal issues of Chyna’s former boyfriend Triple H dating Stephanie McMahon. Chyna has always maintained that this was the reason for her release. After her brief run in New Japan in 2002 things got worse for Laurer in life. She was starting to get involved with pornography, drugs and alcohol. She appeared n Surreal Life and Celebrity Rehab with Dr. Drew where her life demons came to life. I remember watching an interview she had with Vince Russo awhile back and she seemed like she was at peace and wanted to bury the hatchet with WWE. She attempted many times with the most recent time being at Roddy Piper’s funeral last year.

I also find it distasteful that the WWE decides all of a sudden to highlight Chyna’s greatest moments in WWE when in the last 15 years they barely even mentioned her. I truly believe if someone in WWE or the McMahon family would have reached out to Chyna I think things would have been much different for her. It’s a very sad ending to what should have been a remarkable life in career. My thoughts and prayers go out to Joanie Laurer’s family and friends. Her achievements and her in-ring presence will never be forgotten.