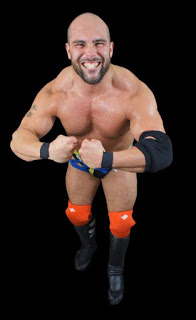 When I I think or hear of Josh Burgess I think of a devout Christian, a brother in Christ and from the brief conversations I had with him a genuine nice guy. Josh trained under UFC Hall of Famer Dan “the beast” Severn and began wrestling regularly at Price of Glory.  I first met Josh in 2006 when he debuted in Price of Glory Wrestling as Christian Abel. As Christin Able he proved to be a formidable opponent that tons of talent and charisma. On February 10, 2008 Christin Able captured the POG Heavyweight Championship from Josh Raymond. He went on to defend the title against the likes of Eddie Venom, Bryan Skyline, Money Mike, and BAM. I was in attendance for his title defense against BAM and it was a beautiful match between the two. It was the main event of a card I will never forget. He also captured the 2007 Glory Cup by defeating Johnny Dynamo.
The last time I saw Christian was a few years back when I was doing commentary for Championship Wrestling of Michigan. He was becoming a well known worker in the Midwest wrestling for AAW, IWA-Midsouth and at one point Ring of Honor. These are just a few out of many wrestling promotions he worked for. He captured the AAW Tag Team championships on two occasions with his good friend Josh Raymond. Christian got to work with some pretty great people during his time in the ring Some of those names include The Young Bucks, Truth Martini, Davey Richards, Roderick Strong, Austin Aries, All Night Xpress, The Briscoes, Mike Bennett, Tyler Black(Seth Rollins), Jimmy Jacobs, Colt Cabana, Sami Callihan(Solomon Crowe), Kevin Steen, El Generico(Sami Zayn), and Christopher Daniels. With all of those great names most people would have an ego, but he thanked God for all of those opportunities. He gave it all to God and was not ashamed to use his following to praise God when the occasion presented itself. Abel made his presence known in the ring. Whether or not if he was a singles competitor, team with Caden Ames as Absolute Answer, teaming with Josh Raymond or being apart of House of Truth he brought his best every single night. Christian Abel is a brother in Christ but I alone cannot do his memory justice. Josh Burgess went to be with our Lord and Savior on April 14, 2016. He will be missed by his family, friends and those who shared a ring with him. Here are the thoughts and memories of those who worked with him and shared a locker-room with him.
BAM:  “Josh was always pleasant and humble. I always enjoyed sharing a locker room with him.”

Mark Pennington: “It’s hard to sum up in words what a tremendous impact he made on people when they interacted with him. Always positive, always fun, always professional.”

Fabuzio: “I’m really saddened to hear about this loss. I remember him always being funny and having a lot of charisma even in the locker-room with everyone he was just a real cool dude sad to hear.”

Nate Mattson: “Christian Abel was a friend to many in the Michigan wrestling scene, and he will be missed dearly. I had the pleasure of working with him only on a few occasions, but I noticed how quickly he picked things up and adapted to any situation. Josh was funny, outgoing, kind and respectful to everyone in the business. We had conversations about God, and I remember at one point he had considered going into youth ministry full-time. By our talks I’m confident that he is with the Lord. I pray for those closest to him that they will be comforted at this time. Abel definitely left his mark here on Earth.”

Noah Lott: “R.I.P Christian Able. Josh was a great wrestler and friend. You will be truly missed. I keep reading everyone’s stories about you and how you were. I remember countless shows we were on together, and jokes that were played. All the boys lost someone who meant a lot to them. I know you were very close to God and now you are with him. Miss ya brother….”

Leonard Brand:  “My friend Christian Abel or Josh to most of us is gone now and as I sit here with tears in my eyes I am truly at a loss for words. Josh wasn’t just any wrestler. He was someone I truly thought would make it big in the business until back injuries held him back. Josh was always good to me regardless how busy he was. Josh always had time for photos and always seemed to be genuinely pleased to see me. I saw him cut a promo one time up in Kalkaska that gave me chills that was intertwined with the wrestling part of it but also with some Christian believe in it too. It was a surreal moment and I realized this guy is going to be a star one day. A few years ago I would hang out with the Raymond family and take family photos with them. One particular time Josh showed up and it was like old times. This just happened to be the day I had the deal with the woman beater at the rest stop on 131 and when Josh heard the story from Josh Raymond he was so happy I had defended this woman’s honor. That is the Josh I will always remember. A truly good guy who I liked very much and was more than just another Michigan wrestler. Josh cared about his friends and I feel a incredible loss this afternoon. I last saw Josh last summer at the HPW show in Paw Paw and to sit and talk with Josh before and after the show was just like old times. He had been away from the ring for a while but he was so happy to be in the ring again. I will remember when Josh and Caden Ames would hang out at World One in Bay City helping with ring set up and anything else that needed to be done and they were not even booked on the card and had drove all the way across the state to hope to get a spot. I was so proud when Josh and Josh Raymond starting working for ROH. So many good memories where do I stop? I don’t know what to think or how to even process this? I know my heart goes out to the Burgess family and the Raymond family and so many others. I am mad. I am hurt. I am sad. I am crushed. I don’t know what else to say but Josh thank you so much from the bottom of my heart for being my friend and a class act. I love you bro…”

Truth Martini: “He will always have a special place in my heart because Christian Abel and Josh Raymond were the first tag team I managed in Ring of Honor. I knew him on a personal level and on a professional level. Christian Abel was the guy that brightens up your day. I’m going to miss him.”

Everyone in @AAWPro is saddened by the loss of Christian Able. He will be truly missed. pic.twitter.com/lEyw9r7SdC

We are deeply saddened to hear of the passing of Christin Abel. Rest in peace, friend. pic.twitter.com/xpkuP4slVs

Christian Able was always one of the most fun people to be around, dude was super nice and hilarious. Was just talking about him yesterday

Rest in peace big brother Abel you will be missed. My condolences to all family and friends. Way too young.

Just heard about the passing of Josh Burgess/Christian Abel. Absolutely deviating, such an amazing human. You can will be missed friend. RIP

Godspeed, Christian Abel. When I brought the “House of Truth” to ROH in ’09, he was an absolute pleasure to work with. Rest well, brother.

R.I.P. Christian Able. From Absolute Answer to the House of Truth and his singles stuff, I cut my teeth with him. I’ll miss you, brother.

RIP Christian Able. He truly was one of the best guys I have ever met in this crazy business of Pro Wrestling. I will miss you Brother

.@JoshRaymondYeah, me and Christian Abel(RIP) from a few months back. Will always love that dude. pic.twitter.com/66dzuJ9VEZ

Absolutely gutted to hear of the passing of one of my closest friends Josh Burgess who wrestled as Christian Abel. pic.twitter.com/2DBkjbLTZX