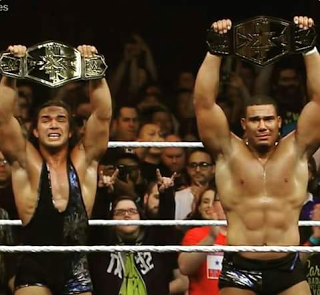 Tonight was latest NXT TakeOver special and it took place in Dallas, Texas the city that’s hosting Wrestlemania. Last time NXT was on the same weekend as a major pay-per-view was Summerslam 2015. That hands down was one of the best Takeover show’s in the early history of NXT on WWE Network. I had a feeling going into this NXT Takeover that iw was going to be something special. I had a feeling with it being Wrestlemania weekend that Triple H and his brand were going to look to set the pace, raise the bar and get people talking heading to Wrestlemania. In my opinion he accomplished just that. Before I really dive in with my thoughts here are the results of TakeOver Dallas.

From the beginning the crowd was on fire and as they should have been. They got treated to an awesome show. I love the reaction the crowd gave for everyone involved.  I love that the Tag Team division is on fire again. There are so many tag teams between NXT and the main roster it’s great to see. American Alpha is going to go places and be very successful.  Speaking of success, it was great to see the debut of the Austin Aries and the experience he’s going to bring to NXT.

There were two additional championship matches at TakeOver. Asuka and Bayley had a great match that lived up to the standards of what the Women’s Division has become. I really see Bayley coming up to the main roster now. She has nothing left to prove and she made her mark in NXT. Speaking of making their mark, Finn Balor surely made his mark on Samoa Joe in the NXT Title Match. Joe was busted open early on and it changed the entire complexion of the match. I really think they had to change the match as it went because of Joe’s eye being cut open. It still ended up being a good match and the blood made it more interesting to watch.

Looking back on this even I am going to say that Sami Zayn and Shinsuske Nakamura had the best match on the card. This match was brutal, epic, and an instant classic. I dare say this might be the greatest match in NXT history to date. I have never seen a match this great on WWE television in a long time. If you’re a fan of pro wrestling in general how can you not love this match? It combined everything WWE, Ring of Honor and New Japan does. This match put NXT TakeOver Dallas over the top. The rest of the card was good but this match alone made it great. I also thought it was interesting to see Kota Ibushi and Bobby Roode in the crowd. I think that’s a huge sign of things to come. I got to give NXT TakeOver Dallas a 9.5 out of 10. Tonight NXT did indeed take over the city of Dallas.