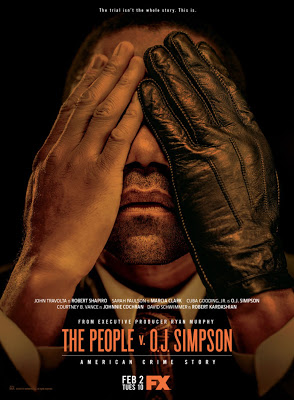 Before I begin writing I want to clarify that I am in no way, shape or form a racist. My opinions are based off what I observed growing up and what I watched during this TV series. Typically I do not write about TV shows outside of sports and wrestling but considering it’s about one of the greatest football players I felt compelled. I was just a kid when the OJ trial was going on but wasn’t old enough to understand what was going on. Later on I knew of the major players like Marcia Clark, Johnny Cochran, Robert Shapiro and Robert Kardashian.  All of them became famous after this trial. I said going into this show that the show was either going to make him look guilty or completely innocent. Honestly the show didn’t make me change my mind about how what I think and how I feel. It’s because of the cast and how well they did their roles is what made me really feel the way I do now. Everyone on the show did a marvelous job and should be applauded on their work.
If you were to ask me the question if I think OJ Simpson is guilty or innocent I would without a doubt tell you I think he’s guilty. There was too much evidence proving his guilt. I understand that there was a racist police officer involved but I don’t think that one man could plant that much evidence against someone to set the up. OJ seems like a down to earth, soft spoken and polite man from what was presented on the TV show. Is it possible that OJ had some sort of mental disorder from playing football or something that relates to it? I have to wonder because he was reported eight times as having abused Nicole during their marriage. Then lets fast forward to 2007 in Las Vegas. He was convicted of armed robbery and kidnapping. It was then that my mind was really made up about what he did in 1994. If the man was willing to kill someone for his merchandise then what would keep him from killing his ex-wife and her lover? I was a huge of fan of OJ’s movies appearances and learning about what he did on the football field. OJ was a larger then life athlete before this trial and I don’t think anyone during that time will ever forget him or the trial.
The aftermath left the Goldman’s and Brown’s with broken hearts and no other answers. They were awarded 33.5 million dollars in the civil suit but only received a half a million dollars. To this day there was no further investigation into the murders. Since then Robert Kardashian passed away in 2003, and Johnnie Cochran passed away in 2005. Both men became very well known and ultimately were celebrities. Marcia Clark, Robert Shapiro, and Mark Furhman are still alive. Their lives were brought to light in this show and I am sure they will be remembered now more then ever. I truly enjoyed watching this series and it really made me interested our legal system, civil rights, and crime scene investigation. If you did not watch this show then I would highly suggest you do watch it. It’s very intense, emotional, and passionate. I can honestly say that this show captured and captivated my attention and it’s going to be a long time before I get into a show like this. Please share your thoughts on whether you think OJ is innocent or guilty and if this show made you feel differently.
Please Share This