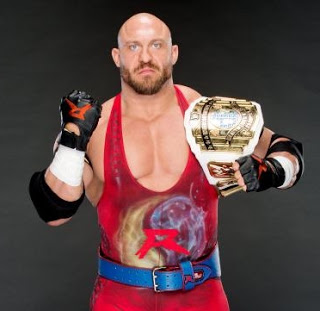 One night after having one of the best matches of his career Ryback was sent home. Ryback has been unhappy for awhile now and has publicly stated so. Ryback has been upset money and his place within the company. Today he released this statement about his current situation.

“Today I sit and fly home and for the first time in years feel absolutely free. I will start by saying I did request to be taken off of WWE television until myself and Vince could get a yes or no on a new deal. This has been going on since my IC Title run and had been nothing but a major strain on my life as all I ever wanted to do was work for WWE. I was told to head home until we agree or not agree to specific terms and contrary to reports it isn’t over money or a bus that stuff was settled a while ago. It comes down to a major problem I have with not only WWE but wrestling in general.

Wrestling is pre determined, we as performers know before we go out to that ring or perform a backstage scene who is winning and losing etc or have a general idea of what we are going to say. It blows my mind how in a sport which is pre determined from a company standpoint winners are paid so much more than the losers. Every single person who works for WWE from top to bottom is absolutely just as valuable as the next. The winners cannot win unless the losers go out there and agree to lose to them.

It blows my mind that in this day and age though we still adhere to this formula. Obviously things have always been this way, but does that make them right? Times have changed and our goal as humans should be to evolve and learn from our past and the past of others so we could make this world a better place. Why is it a guy who is told he is going to go out and lose and does everything he is told be paid not only less, but much less than said winner over a period of time. Every single performer for WWE sacrifices the same amount of time from home and their families and every single man or women goes out and does what they are told. Looking at this formula though losers turn into what fans like to call jobbers and their value decreases in the companies eyes and before you know it they get released. For what? For doing exactly as they are told!

Why not pay the talent equally? The winners have more MERCH as it is or are supposed to anyways so they get that extra perk, but why make the guy who is told to and agrees to lose earn less and sacrifice spots in big pay per view match ups etc. This is one of the major problems with wrestling and WWE today. Most guys take great satisfaction in helping making other talent, the bitching and the moaning we always hear about stems from the fact they know they are ultimately over time going to make less and live in fear of being released.

I am proud to say I have never gone to change a finish and have gladly took pride in helping put over other talent. Hell look at my pay per view record of 12-26 and you will see that has been the pattern of my career. I have always been confident in my ability and work ethic to being my best every day and ultimately always felt that by doing good it was the right thing to do. Personally seeing my money go down over the years though even though I was working as much as ever and being denied magazine covers and other projects as well as watching my role diminish no matter what I did or how hard I tried takes its toll on a human. Being told no matter how hard I work or how good I get doesn’t always pay off is something I f***ing refuse to ever believe in my life. I am a creative being and to be restricted time and time again is no way to live life. There is nothing I cannot do and I know no matter what comes of this situation I am going to be just fine. It isn’t soley about money, it is about commitment. Commitment to a guy who f***ing cares and who loves this more than anything in the world and wants to know that his passion his efforts and his determination to constantly improve is going to be recognized and taken care of.

WWE may very well release me, which if it is the case so be it. If we can work things out a lot needs to change as I am not living in fear and creatively cannot continue to live a life that limits me creatively. I have many other interests and passions and have been very smart with my finances over the years. I thank every WWE superstar from top to bottom for their sacrifices and for working with me. The world is an amazing place and there is more than just a WWE universe there is The Universe and I will prove one way or another over time I am the greatest big guy in the universe!

I can understand Ryback’s frustration to an extent. He has been a champion, been in main events and does sell merchandise. Does he deserve the type of money that a John Cena makes? That remains to be seen. I do think the WWE pay scale should not be based on winners and losers. I think it should be equal where they value you at on the card. I think they’re should be lower card pay, mid-card and main event pay.I think whatever category you’re in, you should be paid the same amount as everyone in that category.

To Ryback’s point every WWE star works the same amount of days, puts in the same amount of effort, and the sacrifice quite a bit. The only reason I see equal pay never happening is because of merchandise sales, buy-rates and ticket sales. How come someone who is selling no merchandise should be paid as someone who is selling a ton of merchandise? That’s why WWE and every other sport pays the way they do. My advice to anyone in pro wrestling is if you want to be paid more then you are getting  is work on your character, work on your performance in the ring, and get the fans on your side.

As far as Ryan Reeves goes I am sure he will find work if WWE releases him. I think he would do well in Japan or Ring of Honor. If he wants money then TNA Wrestling is not the place to go right now. The Ryback character got better as time went on. He evolved in the ring, and he had a personal story that a lot of us can relate to it. It’s sad to see Ryan Reeves in this situation because the match he had with Kalisto was one of the best of his career. In my opinion he was on an uphill rise with how he was performing in the ring. I hope that WWE and Ryan Reeves come to an agreement so that we will continue to see the evolution of Ryback. Keep checking Hollywood’s World of Sports for more on this developing story.