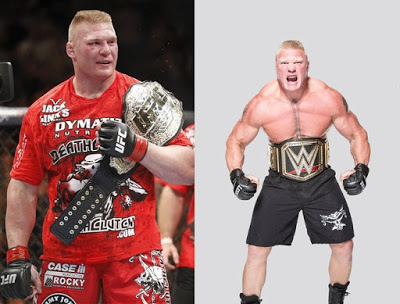 I remember back in 2005 when CM Punk was on his way out of Ring of Honor and headed to the WWE and they called his final run in ROH “The Summer of Punk.” At UFC 199, the company made a historical landmark announcement that Brock Lesnar would return at UFC 200 to fight one more time inside the octagon. You might be asking why is this a big deal? Brock Lesnar became a WWE Superstar again in 2012 and has a contract until 2018 with the company. This is the first time in history that a contracted WWE Star will be fight in the octagon. The MMA and Wrestling world’s have been talking non-stop since this news broke. The news was so big that Ariel Helwani lost his credentials and has been banned from UFC for life for leaking the news earlier then Dana White wanted it to. This news has a lot of significance and this summer one man will significantly impact two separate worlds.

For Vince McMahon to allow one of his performers to compete outside of his company is completely unheard of. I can only recall of one other time in my lifetime that Vince allowed something like this to happen. In 2000, when Mike Awesome left ECW to go to WCW while he was under contract with ECW he had threatened to bring the ECW title to Monday Nitro and throw it in the trash. This was not a storyline, this was a very legitimate real life situation. Four months earlier Vince had signed away Taz and The Dudley Boys to come to WWE. He felt that he was helping Paul Heyman and ECW out by sending Taz back to ECW to take the title off of Mike Awesome. It was the first and only time during the Monday Night Wars that a WWE Star took on a WCW Star. History was made in 2000 and 16 years later history will be made again.

I don’t need to go through all of Lesnar’s accomplishments but in case you have forgotten he is a NCAA Division 1 Champion, All American, IWGP Heavyweight Champion, four time WWE World Heavyweight Champion, Royal Rumble Winner, King of the Ring Winner and a former UFC Heavyweight Champion. There a lot of guys out there who have done both MMA and pro wrestling but none have been successful as Lesnar. There are guys like Dan Severn, Ken Shamrock, Daniel Puder, Bobby Lashley, Tank Abbott, Josh Barnett and Bob Sapp. All of them were either successful in one or the other but not both. The three who come close to Lesnar are Severn, Shamrock and Lashley. A lot of people might argue that point but Lesnar made a huge impact in both in a very short amount of time.

I believe Lesnar’s appearance at UFC 200 is good for WWE in so many ways. Lesnar fights on July 9th and WWE Summerslam is 21st. If Lesnar wins this fight that will heighten what ever storyline he is in headed into Summerslam. It was also elevate whoever opponent is at WWE’s second biggest pay-per-view of the year. I cannot wait until July 9th when this begins and will be intrigued all the way until August 21st to see how Lesnar’s summer ends. If you love both MMA and pro wrestling like I do then this is going to be a fun summer to be a fan of both. The Summer of Lesnar is upon us so be prepared or you might end up in Suplex City!