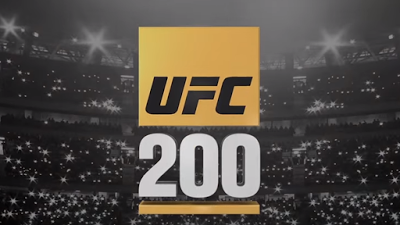 This past week has been one of the craziest weeks not only UFC history but MMA history. There has been a lot of buildup for this historical event for a few months. With Ronda Rousey not competing and Conor McGregor being a diva a lot of people questioned what kind of Dana White and company could pull together. Jones/Cormier, Tate/Nunes, Edgar/Aldo and Browne/Velasquez were signed to the UFC 200. On June 4th, the UFC aired their commercial for UFC 200 and at the end of it former UFC Champion Brock Lesnar appeared. Two days later it was announced that Lesnar would take on Mark Hunt. UFC 200 was not the only event that took place this week. There was UFC Fight Night on Thursday and The Ultimate Fighter Finale took place on Friday.

Before the action even started drama unfolded and almost threw UFC 200 into mass chaos. For 24 hours it was chaos. On Wednesday the UFC was informed Jon Jones test positive for two banned substances by the USADA which resulted in Jones being pulled from the card. Cormier was upset, Dana White was upset and there was outrage amongst fans. A little 24 hours later it was announced that Daniel Cormier’s new opponent was going to Anderson “the Spider” Silva. This made the card even more powerful again. However Jones wasn’t the only drama leading up to the card. Miesha Tate had a scare for her weigh-in, Johnny Hendricks missed weight and Brock Lesnar almost maxed out at heavyweight. With all this unfolding it still made for one hell of a weekend.

On UFC Fight Night, there are three things that stood out to me. Joe Duffy should be considered a title contender after his performance. The guy is 15-2 in his MMA career and knows how to finish people. I think this fight gave him a lot of confidence and momentum for the future. I wasn’t too fond of the split decision between Roy Nelson and Derrick Lewis. I thought Nelson won the fight barely but his game plan for the fight sucked. I hope he learned his lesson. The night concluded the Eddie Alvarez defeating Rafael dos Anjos to become the new UFC Lightweight Champion. This was the first of five title fights that took place this past weekend.

Another title fight that took place this weekend was between Joanna Jędrzejczyk and Cláudia Gadelha for the UFC Women’s Strawweight Championship. There was a lot of bad blood between the two of them from their last fight and the Ultimate Fighter show. The women went five rounds and beat the hell out of each other. Jedrzejczyk ended up retaining her against Gadelha but both women deserve the utmost respect. We also found out that Andrew Sanchez and Tatiana Suarez are the new Ultimate Fighters. The excitement of Friday’s weigh -ins and fights had me excited and eager for Saturday.

When you take a look at the 200 card it was stacked from top to bottom which includes the Prelims. They UFC 200 Prelims could have easily been its very own pay-per-view and done well. As I said before Dana White built a massive 3 nights worth a fights. This was no different. The prelims were amazing and never in the history of me watching the UFC have I ever seen all four fights go to decision. The winners of those fought Pena, Gastelum, Dillashaw, and Northcutt. I think Sage Northcutt Is the future of the UFC. The prelims had me very eager for the main card.

The main card started with Cain Velasquez absolutely looking phenomenal against Travis Browne. It’s almost like Browne didn’t have an answer have for Cain at all. The fight ended at the end of the first round. After being embarrassed by McGregor months ago Jose Aldo came in with a game plan and he executed. He and Frankie Edgar went the distance. Aldo dominated but I got to give Edgar a lot of credit for taking that much punishment and he was still standing at the end of it. Aldo is the new Interim Featherweight Champion. Up next for Aldo is a rematch with Conor McGregor. One champion who isn’t hiding is Daniel Cormier. I don’t understand why fans boo someone with humility and class. I got to give major props to Anderson Silva for taking the fight on two days’ notice. He hung in there with one of the best fighters in the world. Cormier won the fight but I think he won the respect of the fans for being an awesome champion. Speaking of being classy, there has been no one classier this week then Brock Lesnar. Love him or hate him Lesnar is a super freak of an athlete. I was very nervous about this fight because of what I have seen from Mark Hunt in recent months. Lesnar had a great first and third round. He seemed a little unsure at times but in the final minutes of the fight he totally poured it on against Hunt thus giving him the victory. The main event of UFC 200 is historical in so many ways for female athletes. I think it’s great they are getting the respect the rightfully deserve. Amanda Nunes came out to fight and with her fast start she beat Miesha Tate for the UFC Bantamweight Title in the first round.

UFC 200 capped an awesome three days of MMA fighting. This set up for an awesome next few months of fights. What are your thoughts on the weekend? What was your favorite fight and least favorite fight? How do you feel about where the UFC is going?