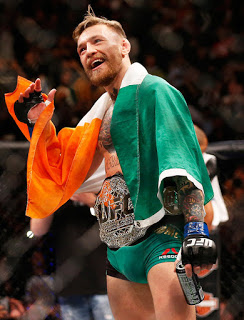 I have always been a lifelong WWE fan and have also been a fan of the UFC since it’s beginning. I remember guys like Ken Shamrock, Don Frye, Dan Severn and Royce Gracie. These guys are legends and are as tough as they come. There is no doubt in my mind that the fighters of the UFC have to train very hard to fight but when Conor McGregor makes the remarks he did about the WWE roster then it makes me lose some respect for hard they train. The stars of WWE wrestle on average 250-300 times a year while having to train and workout to maintain their health and look. The fighters of UFC may fight three times a year. For McGregor to discredit the talent, toughness and ability of the entire WWE roster just makes him and the UFC look bad. I understand Brock Lesnar upset a lot of people with his failed tests but Brock Lesnar is not the entire WWE. He wrestles in WWE a whole 3 times a year much like a UFC fighter. If you want to slam Lesnar go for it, but to bash entire roster for talented men and women is just absurd and dumb here is what McGregor said to get the backlash he’s getting.

I didn’t mean no disrespect to the @wwe fans. What I meant to say was that I’d slap the head off your entire roster. And twice on Sunday’s.

Your the size of my leg. Shut up. https://t.co/fBVEdf8hE1

Would you prefer to find us individually or have us all line up at once? I know your time is valuable, sir. https://t.co/XPnKhWAlza

I would pay good $$ to see @RealKurtAngle STRETCH THE PISS outta @TheNotoriousMMA and make him tap. #itstrue https://t.co/Uvo8H34nHy

I volunteer as tribute. Just need to drop 40lbs & find where every dude in Brooklyn gets their haircut/tats https://t.co/32BUXYoSyR

Sorry pal no disrespect to u, but my fights are legit, unlike the fixed fights u have in @UFC. I’ll embarrass u. https://t.co/X5WCyeHYbf

Coming from a guy who built a career copying my persona, I expected the type of class we get from Ronda or Anderson. pic.twitter.com/iVoC0Xva5g

After Diaz finishes you again, I dare you to try guys like Dolph, Brock, or Fit.

If anyone doubts whether or not Doloh could tie Conor in a knot, do yourself a favor and Google his accomplishments pic.twitter.com/h7mitMeBXn

I could go on and on all day with WWE guys lashing out at McGregor but I know you all get the point. WWE is scripted and everyone knows but to say they aren’t tough has got to be a lack of common sense. Why don’t you ask Daniel Puder how tough they are? Yeah Daniel Puder, an inspiring MMA fighter won WWE’s Tough Enough and he didn’t last long. I don’t think UFC stars should talk trash about WWE and WWE stars shouldn’t talk trash about UFC. They are two totally different things that require different types of talent. My advice to Conor McGregor is don’t worry about the WWE. You should worry about your fight with Nate Diaz so you don’t end up getting embarrassed again. UFC 202 takes place August 20th, which is the night before Summerslam. The Summerslam event is one of WWE’s biggest events of the year so WWE could be rejoicing in the moment if McGregor loses to Diaz again. Until then we will have to see how many more WWE stars come out to call out McGregor. This is not over by a long shot.